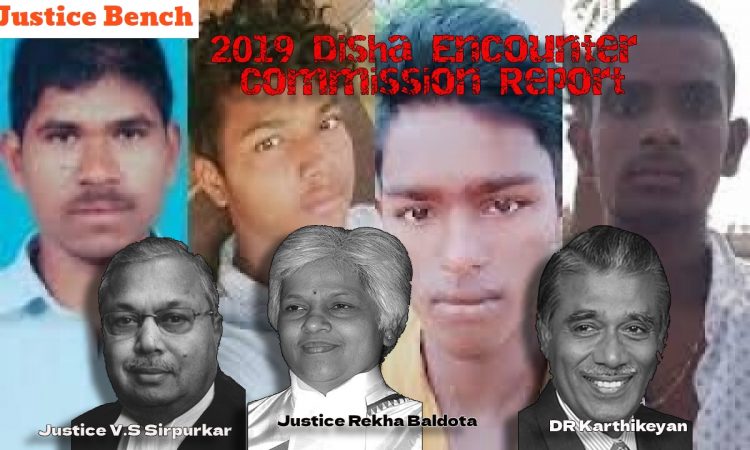 The Inquiry Commission panel headed by Justice VS Sirpurkar recommended that all the ten police officers be tried for the offence of murder.

The court-appointed Commission submitted its report in which it has stated that the police deliberately fired at accused with intent to cause their death. The Inquiry was initated to probe the alleged encounter killing of four rape accused in Hyderabad in December 2019.

Therefore, the inquiry commission panel headed by former Supreme Court judge, Justice VS Sirpurkar recommended that all ten police officers be tried for the offence of murder.

“All the 10 police officers – V Surender, K Narasimha Reddy, Shaik Lal Madhar, Mohammed Sirajuddin, Kocherla Ravi, K Venkateshwarulu, S Arvind Goud, D Janakiram, R Balu Rathod and D Srikanth, are to be tried for the offences under Section 302 read with 34 IPC, 201 read with 302 IPC and 34 IPC, as the above discussion would show that the different acts committed by each of them were done in furtherance of common intention to kill the deceased suspects,”.

The commission highlighted the evidence which concluded that three of the four accused, who were encountered, were minors at the time of the incident.

“The police were well aware about the school records of Jollu Shiva and Chennakeshavulu and yet have not recorded the age of the deceased persons according to the admission registers at any given point of time. Therefore, we are of the opinion that at the relevant time, Jollu Shiva, Jollu Naveen and Chintakunta Chennakeshavulu were minors,” .

the Commission stated in its report.

Primary findings of The Commission

The Claim that deceased suspects assaulted policemen resulting in injuries was false.

The allegation of snatching pistols from policemen is artificial and unbelievable.

The evidence relating to the snatching of weapons is best illustrated by the flip-flop evidence of CW-44, the leader of the police party.

The deceased suspects were not familiar with firearms, and thus would not be able to operate the pistol easily.

It would be highly improbable that they would fire at the police party while running.

Cannot be said that the police party fired in self-defense or in a bid to re-arrest the deceased suspects.

There was a grave suspicion that the best evidence in respect of CCTV footage, video recording of the inquest, and the crime scene was withheld from the Commission.

The suspects, at the time of arrest, were entitled to a number of constitutional and statutory rights that were violated by the police personnel.

There were also serious violations of law at the time of granting police custody by the Judicial Magistrate;

Three of the four accused were minors.

From the report it was observed that the deceased had not committed any offence like snatching weapons of police officers, attempting to escape from custody, assaulting or firing at the police party.

Accordingly, the Commission concluded that the actions of the police officers in deliberately firing at the deceased suspects were not justified.

Two advocates namely GS Mani and Pradeep Kumar Yadav had filed a petition seeking an independent investigation into the alleged fake encounter killing of four men accused of raping and murdering a 26-year-old veterinarian in Hyderabad on 28th of November 2019.

The Bench comprising then Chief Justice of India SA Bobde had set up the inquiry panel after hearing a petition.

The Commission had earlier been granted additional time to complete the probe after COVID-19 had hampered its functioning.

Today, the top court accepted the report on record.