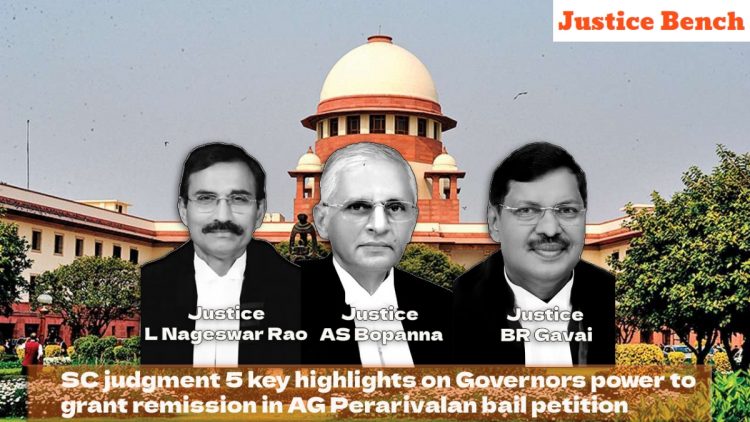 The Supreme Court ordered the release of the convict AG Perarivalan in the assassination of former PM Rajiv Gandhi, after noting there was considerable delay by the Governor in deciding remission plea under Article 161.

the Supreme Court While ordering the release of AG Perarvalan convict in the assassination of former Prime Minister Rajiv Gandhi, made some pertinent observations regarding the power of the Governor to refer a remission recommendation of the State Cabinet to the President of India.

The bench comprising Justices L Nageswara Rao, BR Gavai and AS Bopanna exercised its powers under Article 142 of the Constitution to order Perarivalan’s release after noting that there was considerable delay by the Governor of Tamil Nadu in deciding the convict’s plea for remission under Article 161.

Perarivalan was convicted and sentenced to death for aiding in making the bomb responsible for the assassination of Rajiv Gandhi at age of 19.

He spent over 30 years in jail until the Supreme Court enlarge him on bail in February 2022.

The plea for remission of his sentence stayed pending even thought the Tamil Nadu State Government had recommended the same in 2018.

This was largely due to the decision of the Governor to refer the recommendation to the President.

The Supreme Court considered the correctness of the reference made by the Governor to the President of India, without taking a decision on the recommendation made by the State Cabinet on remission of the sentence, and found as follows:

1. Advise of State Cabinet is binding on Governor under Article 161

In Maru Ram v Union of India, the Supreme Court had held that in the matter of exercise of the powers under Articles 72 and 161, the President and the Governor respectively must act not on their own judgment but in accordance with the aid and advice of the ministers.

The precendent in ealier judgment makes it clear that the advice of the State Cabinet is binding on the Governor, unless the Governor has been expressly authorised, by or under a constitutional provision, to discharge the function concerned, in his own discretion.

“The advice of the State Cabinet is binding on the Governor in matters relating to commutation / remission of sentences under Article 161. No provision under the Constitution has been pointed out to us nor any satisfactory response tendered as to the source of the Governor’s power to refer a recommendation made by the State Cabinet to the President of India,“.

2. Non-exercise of power under Article 161 is subject to judicial review by the Supreme Court

Even though the Constitution grants certain immunity to the Governor, non-exercise of the power under Article 161 is not immune from judicial review as held in Epuru Sudhakar v Govt. of AP.

“Given petitions under Article 161 pertain to the liberty of individuals, inexplicable delay not on account of the prisoners is inexcusable as it contributes to adverse physical conditions and mental distress faced by a prisoner, especially when the State Cabinet has taken a decision to release the prisoner by granting him the benefit of remission / commutation of his sentence,” the judgment stated.

3. Executive powers of State extends to offences under Section 302 of the Indian Penal Code (IPC)

Going by Union of India v Sriharan, the executive power of the State would extend to offences under Section 302 of the IPC, because no express executive power has been conferred on the Central government either under the Constitution or any law made by the parliament in relation to Section 302 (punishment for murder) IPC.

“In the absence of such specific conferment, it is the executive power of the State that extends with respect to Section 302, assuming that the subject-matter of Section 302 is covered by Entry 1 of List III“, the Court said.

4. Judgment in MP Special Police Establishment v State of MP only applies when recommendation of State Cabinet is biased

In said judgment, the Supreme Court had held that where on facts, the bias of the Council of Ministers became apparent, the Governor would be right, on the facts of that case, to act in his own discretion and grant sanction.

“We are afraid that the judgment of this Court in M.P. Special Police Establishment is not applicable to the facts of the present case. No arguments have been put forth to make out a case of non-consideration of relevant factors by the State Cabinet or of the State Cabinet having based its recommendation on extraneous considerations,” the three-judge bench ruled.

5. Reference to President 2.5 years after State Cabinet recommendation is inimical to constitutional scheme

The bench noted that it was only when the Court started enquiring about delay in taking a decision on the State Cabinet’s recommendation that the Governor forwarded the recommendation to the President.

“The reference of the recommendation of the Tamil Nadu Cabinet by the Governor to the President of India two and a half years after such recommendation had been made is without any constitutional backing and is inimical to the scheme of our Constitution, whereby ‘the Governor is but a shorthand expression for the State Government’,” the judgment stated.

In context of the above, the Court deemed it fit to not remand the matter back to the Governor and exercised its powers under Article 142 to set Perarivalan at liberty