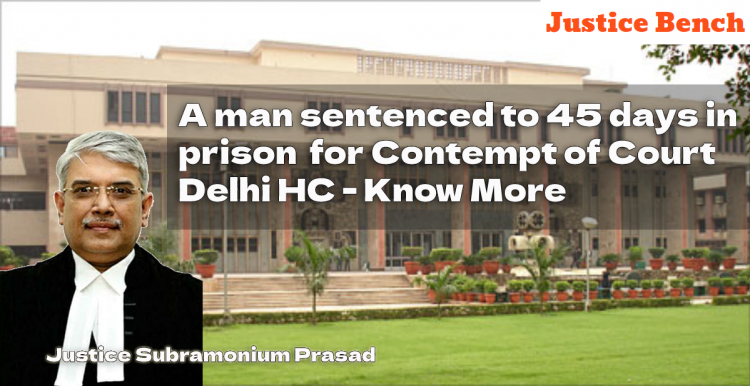 The purpose of contempt jurisdiction is to uphold the majesty and dignity of the courts of law, since the respect and authority commanded by the courts of law are the greatest guarantee to an ordinary citizen and the democratic fabric of society will suffer if respect for the judiciary is undermined,” the single-judge stated.

The Delhi High Court on Friday sentenced a man to 45 days of simple imprisonment for contempt of court despite the court’s orders he went ahead to the contrary [Nirmal Jindal v Shyam Sunder Tyagi and Ors] and demolished a boundary wall using a JCB excavator.

The Bench comprised of Justice Subramonium Prasad stated that the one Shyam Sunder Tyagi, had demolished the wall using a JCB excavator indicated that he harboured the intention to terrorise the petitioners, and it demonstrated that he possessed scant regard towards the orders of the court.

Thus Shyam Sunder Tyagi had undermined the dignity of the court and outraged the majesty of the law, and he deserves no mercy. Said the court.

Accordingly, the Bench further stated that a strong message has to be sent to society that orders of the Court cannot be flouted by using strong-arm tactics. The High Court was dealing

The petitioner Nirmal Jindal had approached the Court in 2020 for the construction of a boundary wall around her property.

The Court, while noting that there was a dispute on the property, allowed her to construct the wall on the condition that the same will be demolished if the Revenue Department finds that the property indeed belonged to the other side besides granting her police protection.

Despite the court order, on January 3, 2022, Mr.Tyagi came with a bulldozer and a few men, and demolished the wall.

Though an unconditional apology was filed by Mr.Tyagi before the Court the single-judge rejected the same observing that Court’s orders were passed in his presence. The Court further observed that the demolition of the wall happened more than a year after construction, which can only be construed as an attempt by him to willfully flout the orders passed by the High Court.

The Court ordered that a fine of Rs 2,000 should be imposed on Tyagi and he should be taken into custody.