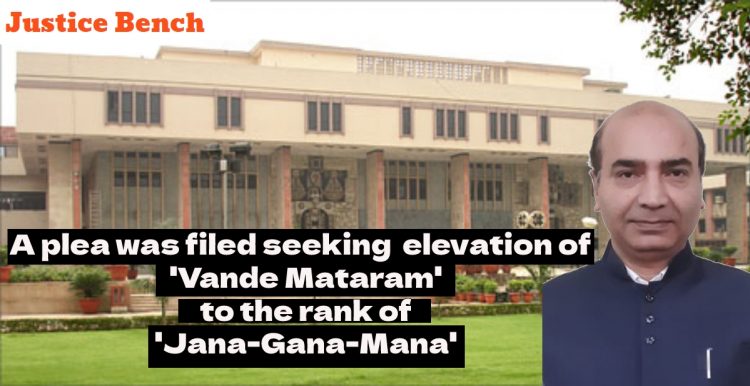 A Plea before Delhi High court sought order the Centre and State to ensure that the national anthem and ‘Vande Mataram’ be played and sung every day in all schools.

The case was filed by Bharatiya Janata Party leader and advocate Ashwini Upadhyay, who argues that the song “Vande Mataram” played a pivotal role in India’s independence movement and should be honoured and given equal status to the national anthem.

Giving ‘Vande Mataram’ equal status will be in keeping with the spirit of Constituent Assembly President Dr Rajendra Prasad’s remark.

The petition also urged that the national anthem and “Vande Mataram” be played and sung in all schools and educational institutions on every working day.

According to Upadhyay, the sentiments expressed in ‘Jana Gana Mana’ were articulated with the State in mind. The thoughts stated in ‘Vande Mataram,’ on the other hand, reflect the nation’s spirit and style, and hence deserve equal respect.

He went on to say that ‘Vande Mataram’ is a symbol of India’s history, sovereignty, unity, and pride, and that disrespecting it in any way, whether covert or overt, would not only be anti-social, but would also mean the end of all our rights and existence.

“Every citizen must therefore not only refrain from any such activities but also do his best to prevent any miscreant trying to show any disrespect to ‘Vandemataram’. We must be proud of our Nation, our Constitution, National Anthem and National Flag and put national interest above our personal interests and only then will we be able to protect our hard-earned freedom and sovereignty. It is the duty of the executive to frame a national policy to promote and propagate ‘Vandemataram’,”