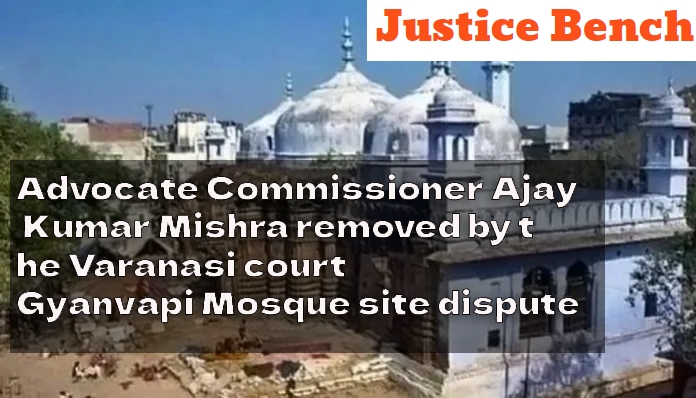 Two days time granted by the Varanasi Court to the committee to submit the report on the survey and videography undertaken by it.

On Tuesday Advocate-Commissioner Ajay Kumar Mishra has been removed from the court-appointed committee that was formed to survey the Gyanvapi Mosque.

Two days time granted by the Court to the committee to submit the report on the survey and videography undertaken by it.

On Monday The judge had passed orders for the sealing of the area within the Mosque complex from where a shivling was recovered during the survey.

A suit filed by Hindu parties claiming that the Gyanvapi Mosque houses idols of Hindu Gods, owing to which fact Hindus should be allowed to worship and do puja at the site.

The order was passed after counsel for the plaintiff Harishankar Jain contended that a shivling has been recovered after the survey and the area should be sealed immediately. The Advocate-Commissioner is yet to be submitted the report before the court.

The one Plaint Rakhi Singh and others have sought a declaration that their right to profess religion as guaranteed under Article 25 of the Constitution is being breached.

The contention of the suit were that there are deities such as Maa Gauri, Lord Ganesh and Hanuman etc at the site and that Hindus should be allowed to enter the site and offer their prayers and perform pooja and offer bhog to their deities.

The civil judge had passed an order on August 18, 2021 appointing an Advocate-Commissioner after hearing the contentions of the suite. The judge had also ordered the Commissioner to visit the site and inspect and collect evidence as to whether the deities exist at the site.

Further the Commissioner was given the liberty to seek police assistance in case of any disturbance or resistance to the collection of evidence by videography.

The Masjid Committee filed a plea before the Varanasi Court claiming that the Court Commissioner was biased and should be replaced and same was dismissed by the court Thursday last week, which had let to a Survey of the disputed site.