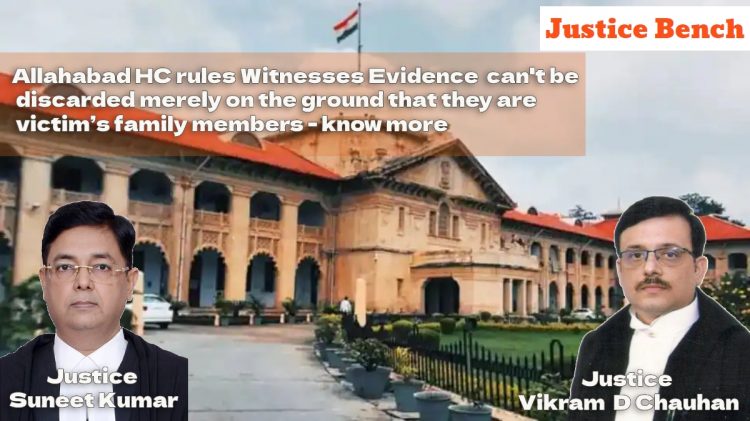 The Court said that Mere statement that being relatives of the deceased they are likely to falsely implicate the accused cannot be a ground to discard the evidence which is otherwise cogent and credible,

Recently The Allahabad High Court in Manvir v State case held that testimonies of witnesses cannot be discarded merely on the ground that they are closely related to the victim.

The bench comprising Justices Suneet Kumar and Vikram D Chauhan while addressing an argument that there were no independent witnesses since all the witnesses were relatives of the victim, rejected such argument.

“Mere statement that being relatives of the deceased they are likely to falsely implicate the accused cannot be a ground to discard the evidence which is otherwise cogent and credible,”.

The High Court was hearing an appeal against a conviction order passed by the trial court sentencing the appellant to life imprisonment for the crimes of murder and rape of the informant’s 80-year-old mother.

The Court observed that a witness has to be normally considered independent unless they sprung from sources that are likely to be tainted.

Further, the Bench’s opined that ordinarily, a close relative would be the last person to screen a real culprit or falsely implicate an innocent person.

A close relative would naturally be present at the scene of the offense, the bench pointed out

“The evidence of such a witness cannot automatically be discarded by labelling the witness as interested,”.

The court took into account that the incident took place at the victim’s residence, a place not ordinarily accessible by the public.

The Bench ruled difference between a related and interested witness and relied on the decision of the Supreme Court in Kartik Malhar v State of Bihar, wherein it was held that a close relative who was a natural witness could not be regarded as an interested witness, since the term “interested” suggested that the witness must have some interest in having the accused convicted.

The High Court further held that it has found the testimony of the witnesses consistent and reliable and thus, rejected the appellant’s contention that the testimony must be disbelieved simply because they were the victim’s close relatives.

The court stated that it did not find any weight in the appellant’s other contentions, it was concluded that the prosecution had proved its case beyond a reasonable doubt. Therefore.

Accordingly the appeal was dismissed.

Advocate Abida Syed was the Amicus Curiae in the case

The respondent was represented by an additional government advocate.