Allahabad High Court; Misuse of Section 498A has harmed the institution of marriage which is being replaced by live-in relationships 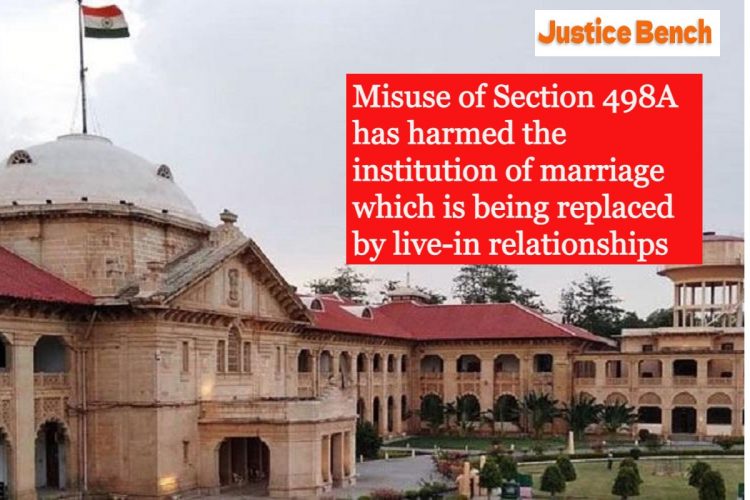 Allahabad High Court; Misuse of Section 498A has harmed the institution of marriage which is being replaced by live-in relationships

In the case of Mukesh Bansal v State of Uttar Pradesh, the Allahabad High Court Bench of single-judge Justice Rahul Chaturvedi observed on Monday that misuse of Section 498A of the Indian Penal Code (IPC) is affecting the traditional institution of marriage and live-in relationships, which are free of legal baggage, are replacing traditional marriage.

The Court stated that live-in relationships have quietly crept into our socio-cultural ethos, displacing traditional marriages, and that this is a reality that must be accepted.

It is an alternative to traditional marriage in which an unmarried couple lives together without marrying, free of the legal implications, commitment, and responsibilities that come with marriage.

According to the judge, it was a voluntary agreement in which an unmarried man or woman decides to live together in a sexual and romantic relationship under one roof.

“Seems to be marriage in alternative or substitute to the traditional marriage in which unmarried couple lives together without marrying with each other free from its legal implications, commitment and responsibilities.”

These observations were made by the High Court while issuing a slew of safeguards to prevent the misuse of Section 498A in light of the growing tendency to nail the husband and his family members by way of general and sweeping allegations.

The Court in its ordered directed that after the registration of a First Information Report (FIR) under the provision, no arrest or coercive action should be taken against the accused for two months, and during this period the issue should be referred to a Family Welfare Committee (FWC).