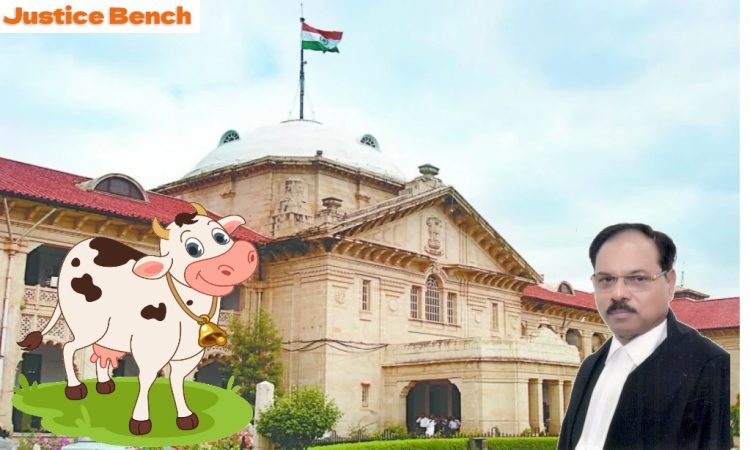 The Allahabad high court bench comprising Justice Shekhar Kumar Yadav  in the case of Saleem Alias Kaliya v. State of UP granted bail to a man accused of committing offences under the Uttar Pradesh Prevention of Cow Slaughter Act, 1955, directed him to deposit ₹1 lakh in favor of anyone of the registered Gaushala (cow shelter) and to serve cows for one month.

After being charged with charges under Section 379 (theft) of the Indian Penal Code and Sections 3 and 8 of the Uttar Pradesh Prevention of Cow Slaughter Act, 1955, the accused, who had been in custody since August 3, 2021, filed a petition before the High Court for his release.

The accused’s advocate claimed that his client was not included in the initial information report (FIR). On the basis of his confessional statement, his participation was presumed during the inquiry. It was also claimed that the accused was charged with two occasions following his arrest, and that nothing was found in his possession. The lawyer further claimed that there was no independent eye witness to the retrieval.

The accused further promised that if he was granted bail, he would deposit one lakh in a registered gaushala in Bareilly, where he would also serve a month.

The Court noted in its ruling after hearing the arguments,

“…taking an overall view of all the facts and circumstances of this case, the nature of evidence, the period of detention already undergone, the unlikelihood of early conclusion of trial and also the absence of any convincing material to indicate the possibility of tampering with the evidence, this Court is of the view that the applicant may be enlarged on bail.”

The accused must also file an undertaking that he would not seek an adjournment of the case before the trial court, which was one of the other bail terms imposed. The High Court ruled that if this requirement is not met, the trial court may regard it as an abuse of bail liberty and issue directions in line with the law.

The accused was represented by advocate Rakesh Pati Tiwari.