Allegations u.s 498a against distant relatives can not be quashed – know more 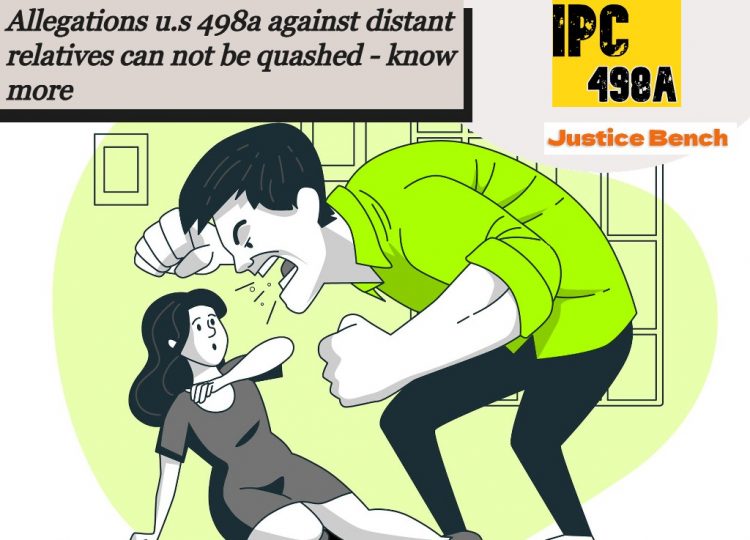 Allegations u.s 498a against distant relatives can not be quashed - know more

In the case of Rajesh Himmat Pundkar vs the State of Maharashtra, the Nagpur Bench of the Bombay High Court division bench comprising Justices Sunil Shukre and Govind Sanap recently refused to quash a First Information Report (FIR) lodged against the relatives of a man in a Section 498A case, saying that relatives living in distant places often meddle in the affairs of a couple and harass the wife in a plea filed by a husband and siblings.

While the husband lived in Akola district, his parents and a married sister were in Amravati district, and his younger brother was from Pune City, according to the accused. They claimed that because they did not reside with the applicant-husband, the allegations levelled against them as in-laws or relatives of the husband could not be considered real.

On two grounds, the Court refused to accept the argument in an order issued on June 8.

Firstly, there is no presumption in law that a relative living at a distance is always innocent, unless proved otherwise. A relative staying away from the husband and wife can and has been seen in many cases meddling in affairs of the married couple and that too of such a nature and to such an extent, as to amount to real harassment,”

Furthermore, the bench stated that the inquiry into the case was still ongoing and that further evidence could emerge as a result of further investigation.

Then, up till now, we have found that the allegations made by the complainant wife against all the applicants are specific in nature and if their genuineness is to be tested, it would be possible only at the time of trial and not at this stage. Therefore, just because the remaining applicants are not residing alongwith the husband and the wife, it cannot be said that the allegations made against the in-laws do not disclose any offence,”

The couple have three children after marrying in 2007. However, the wife discovered in 2017 that her husband was having an extramarital affair. He assaulted her after she confronted him.

In terms of the in-laws, the wife said in her FIR that when she notified her husband’s parents and siblings about his extramarital affair, they began abusing her instead of restraining his behaviour. In addition, the in-laws demanded a dowry payment of INR 50,000.

The bench emphasised that particular roles had been attributed to everyone of the accused in the case, based on the allegations in the FIR. It was decided that there had been no broad or general omnibus remarks made against the in-laws, establishing a prima facie case against them and refused to quash FIR.

Advocate AB Moon represented the husband and his relatives, while additional public prosecutor I J Damle and advocate Kirti Satpute represented the state and the wife, respectively.