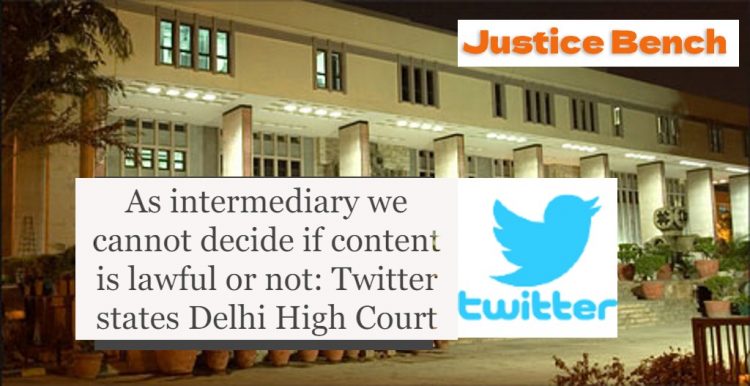 Twitter has informed the Delhi High Court in the case of Aditya Singh Deshwal v. Union of India & Ors that, as an intermediary, it is unable to determine whether any content on its platform is legal or not unless put to “actual knowledge” after being determined by the appropriate government or judicial system.

The social media behemoth claimed that the Supreme Court in the Shreya Singhal case defined “actual knowledge” to imply either a court order or a notification by the government or its agency.

It went on to say that content can also be taken down from Twitter for breaking the platform’s rules of service.

The Information Technology (Intermediary Guidelines and Digital Media Ethics Code) Rules, 2021 [IT Rules 2021] have no effect on this contractual right, Twitter noted in response.

It was also mentioned that the Delhi High Court was already debating whether or not a writ petition against Twitter was valid and that the Bench in that case had already had a portion of a hearing on the subject.

The response was provided in a Public Interest Litigation (PIL) filed by Advocate Aditya Deshwal highlighting the fact that several objectionable posts were being made through the Twitter account Atheist Republic, and that despite numerous complaints, Twitter has not suspended the account or removed the offensive content.

When even the account of former US President Donald Trump was suspended, the High Court expressed its displeasure with Twitter’s behaviour and questioned the social media company about why it did not take action and suspend accounts that post offensive and ‘blasphemous’ content about Hindu gods and goddesses.

The US-based social media juggernaut claims that a writ petition filed against it cannot be upheld because it is not a “State” as that term is defined in Article 12 of the Indian Constitution.

It contended that it is a private middleman and that, according to relevant legislation, only when a user accepts its Terms of Service can they use its services.

Senior attorney Sidharth Luthra attended on behalf of Twitter and said that practically all of the petition’s requests had been granted.

He claimed that the offensive posts had been deleted, a FIR had been filed against the violators, and the account had also been suspended.

On October 28, the Court scheduled the case for further consideration.