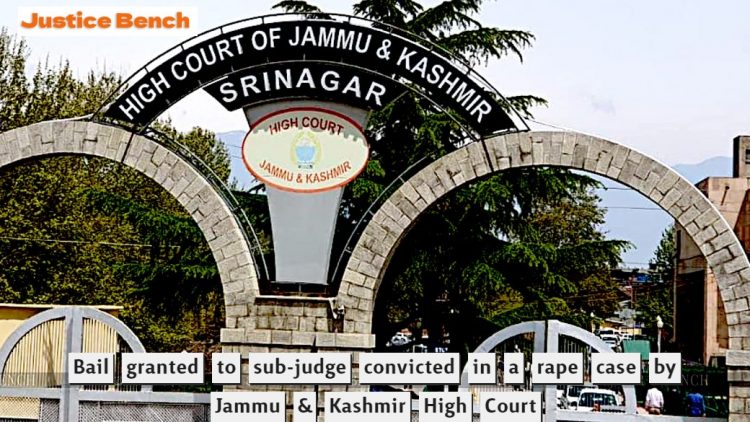 The High Court of Jammu & Kashmir and Ladakh bench comprising Single-judge Justice Mohan Lal in the case of Rajesh Kumar Abrol V/s UT of J&K has granted bail to Rajesh Kumar Abrol (appellant), a sub-judge, who was found guilty of raping and defrauding a woman who sought legal assistance from him in 2018.

Rajesh Kumar Abrol, a sub-judge, was found guilty in October 2021 by a fast track court in Jammu of committing offence under Sections 420 (cheating) and 376 (rape) of the Ranbir Penal Code (RPC).

Justice Mohan Lal, a single judge, granted Abrol bail on the condition that he post a personal bond of one lakh rupees and two sureties in the same amount.

“It is ordered that the substantive sentence passed by the trial court vide judgment dated October 21, 2021 in “State vs Rajesh Abrol” against appellant/convict namely Rajesh Kumar Abrol shall remain remain suspended till final disposal of the appeal, provided appellant/convict executed a personal bond in the sum of ₹1 lakh before Superintendent Central Jail Kot Bhalwal Jammu where appellant/convict is presently serving the jail term, with two sureties of ₹1 lakh each to the satisfaction of Registrar Judicial of this Court,”

It also ordered that the appellant appear before the Court on each and every hearing date, unless the Court exempts him for reasons beyond his control.

The High Court was hearing an appeal from a fast track court decision in October 2021 that found and sentenced Abrol to ten years in prison for rape (Section 420 RPC) and cheating (Section 376 RPC).

Abrol was also found guilty of cheating and was sentenced to seven years in jail and a INR 20,000 fine.

According to the prosecution, Abrol met the victim woman, a Ramban district resident, when she was contesting a lawsuit.

Abrol, as a judicial officer, promised legal assistance and requested domestic assistance from her. With a minor daughter to support, the mother began working in Abrol’s house, where she was promised a higher education for her daughter. The accused offered her a monthly paycheck of INR 5,000.

The appellant obtained a notarized divorce deed to end the victim’s marriage with her husband.

When Abrol learned that she was intending to leave his house, he asked her to stay and put Maang on her forehead, promising that she would be his wife from then on.

He also revealed to her that he had divorced his wife and had been living alone for the past seven years.

The offender obtained the victim’s consent to have sexual contact with her through these actions. She gave in to his demands but kept it a secret from the rest of the world.

According to the prosecution, the woman discovered after one year of marriage with Abrol that he had betrayed her since he was already married to another woman, who was his second wife following his divorce from the first.

The trial court stated in issuing the conviction order that there was a complete chain of events and facts to indicate that the accused committed the crime, and that all of the circumstances brought to light and established were consistent with the accused’s guilt and inconsistent with his innocence.

On appeal, Abrol’s advocate contended that the request for a stay of execution and release should be granted generously unless there is a statutory restriction.

The Additional Advocate General, on the other hand, objected to the plea, claiming that the appellant damaged the survivor’s life under the guise of marriage and thus does not deserve any mercy.

After considering the opposing arguments, the High Court concluded that there is no statutory constraint or bar against suspending the sentence and releasing the appellant on bail.

As a result, the punishment was suspended and Abrol was granted bail. On July 27, the case will be heard again.