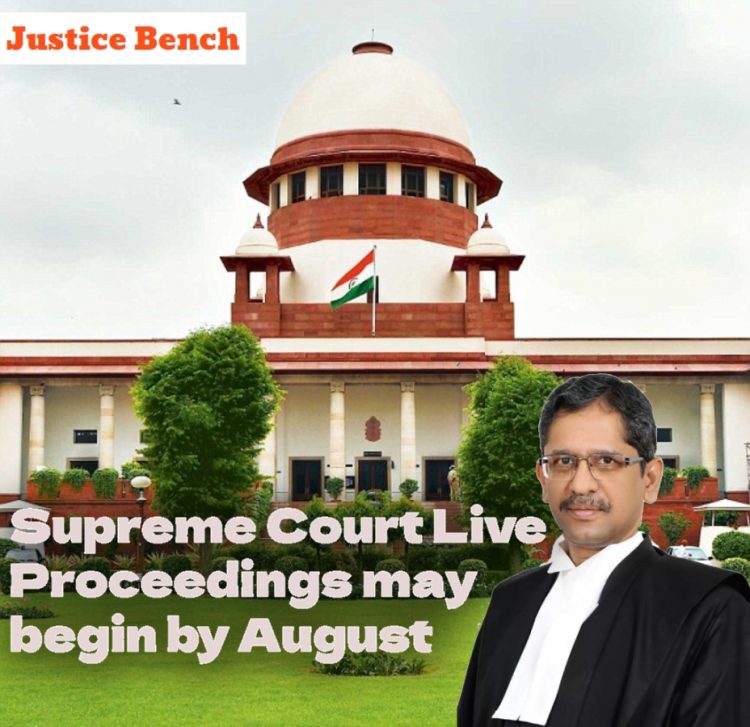 Before the present Chief Justice of India (CJI), NV Ramana, retires on August 26 this year, live streaming of court cases from the Supreme Court of India could become a reality.

According to sources familiar with the project, the apex court is striving to ensure that court proceedings go online within the next few months. The Supreme Court e-committee was also found to be working on an independent platform to hold such live telecasts, which will be available to the High Courts and district courts as well.

The e-committee had previously established an expert committee to prepare model uniform rules for the adoption of live streaming of proceedings by the High Courts.

The Supreme Court Registry is now gathering information on similar rules imposed by the High Courts in order for the top court to integrate best practises when it begins live broadcasting of cases.

“We don’t want to experiment when we do it. We want to make sure that rules governing live streaming address concerns of privacy and delay in live streaming process. Considering there are sensitive matters, we should also make sure intimate and private details can be masked. CJI Ramana will have live telecasting of proceedings on an experimental basis before his tenure comes to an end,”

Officials also indicated that the Supreme Court would require budgetary backing from the central government in order to build its own cloud infrastructure and platform, eliminating the need to rely on YouTube for live streaming.

“Sunlight is the best disinfectant,” wrote a three-judge bench that included then-CJI Dipak Misra, Justices AM Khanwilkar and DY Chandrachud. It had instructed the Court’s administrative branch to prepare the relevant regulations and guidelines to allow live streaming of key cases.

The High Courts of Gujarat, Karnataka, Patna, Orissa, and Jharkhand had began live broadcasting proceedings as a result of this. The Gujarat High Court’s hearings are webcast live on YouTube from all of its courtrooms.

Justice Chandrachud, the Chairperson of the Supreme Court E-Committee, announced earlier this year that as part of Phase 3 of the E-courts project, a proposal was made to build infrastructure for live streaming of court sessions on the Court’s own server rather than a third-party server.

The comments were made during the hearing of a petition challenging the Bombay High Court’s administrative circular limiting the Court’s working hours from 12 p.m. to 3 p.m. due to an increase in COVID-19 cases.