Bombay High Court orders trustees to be appointed in the devotees’ best interests, not the ruling party’s. 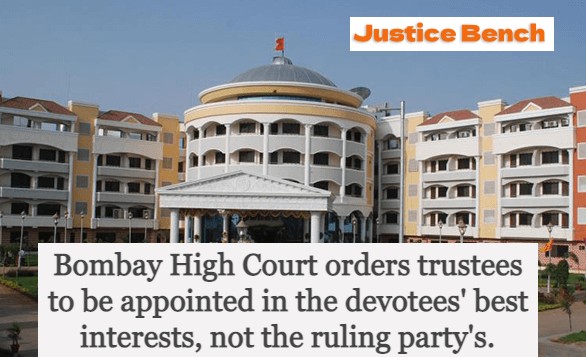 Bombay High Court orders trustees to be appointed in the devotees' best interests, not the ruling party's.

In the case of Uttamrao Rambhaji Shelke & Ors, the Aurangabad Bench of the Bombay High Court held that the appointment of trustees to manage a religious trust is for the public interest of devotees and not for the private interest of the ruling government to accommodate their party workers or politicians and related cries.

A bench of Justices RD Dhanuka and SG Mehare noted that people with political backgrounds or who were close friends of politicians had been appointed to the positions of trustees in the public trust. The Court emphasised that this violated legal norms and did not fulfil the original purpose for which the trust was established.

The observations were a part of a ruling that nullified the appointments of individuals to the Shree Sai Baba Sansthan Trust, Shirdi’s current management committee. The State of Maharashtra was also ordered by the court to establish a new committee in compliance with the Act that established the Trust. The Bench noted that the entire goal and intention of the State government’s creation of such a trust under the plan approved by the Court was rejected for the political benefit of the party in power.

The decision was reached in a number of public interest lawsuits that contested a notice that the State government had appointed 12 members to the committee as trustees.

In addition to the Act being broken, the petitioners’ main complaint was that the State-appointed trustees were either members of the Shiv Sena, Nationalist Congress Party, or Indian National Congress, or they had either lost elections or had criminal records.

The members were properly qualified, according to the State’s legal counsel, but if the petitioners weren’t happy, they could have asked the State to disqualify any of the members, which it would have considered.

In 2017, after concluding that the nominations favoured the then-ruling party, the Court ordered the State government to review each appointment made to that committee in light of the rules adopted.

“This Court anticipates that when distributing public benefits, the State Government will at the very least hold the God at bay. The former edict emphasised that God was not a fiefdom of the ruling alliance.

The High Court stated that none of the appointments made in accordance with the 2021 announcement were in compliance with the 2017 ruling and therefore proceeded to annul and set aside the notification.

It gave the State 8 weeks starting today to form the new committee. In the interim, it stipulated that a committee made up of the following members will oversee the trust’s operations: