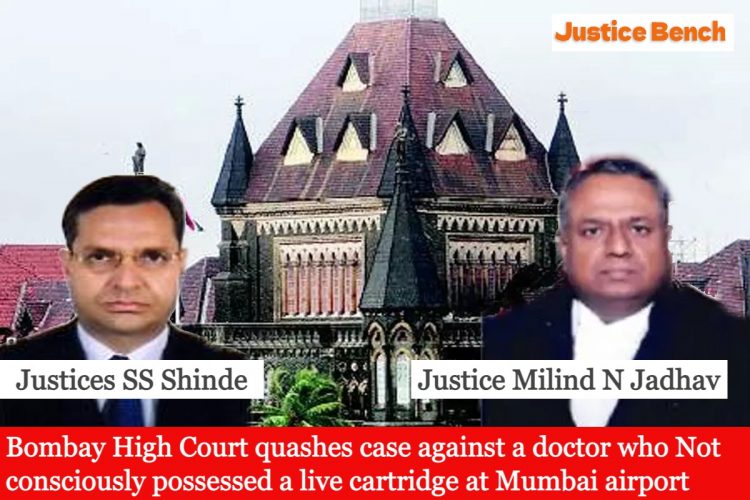 In the case of Dr. Leena Ashay Nandeshwar vs The State of Maharashtra & Ors., a Bombay High Court bench of Justices SS Shinde and Milind N Jadhav quashed criminal proceedings brought against a woman under Sections 3 and 25 of the Indian Arms Act after a live cartridge was discovered in her hand luggage at the Mumbai Airport in 2016.

The petitioner was clearly unaware that she had a live cartridge in her luggage, according to the Court.

The Court clarified that the phrase “possession” under the Act relates to “conscious possession,” not “possession without the person’s consciousness.”

“The Supreme Court in the case of Sanjay Dutt Vs. State through C.B.I., Bombay (II) 1 has clearly held that the possession of the fire arm under the said Act must be conscious possession with the knowledge of and requisite mental element and mere custody without awareness of the nature of such possession cannot fall within the ambit of sections 3 and 25 of the said Act,”

In December 2016, the woman and her family were flying from Mumbai to Kochi when a live cartridge was discovered in her carry-on luggage during a security check at Mumbai Airport.

Under Sections 3 and 25 of the Act, a first information report (FIR) was filed against her. After that, she was arrested and eventually freed on bond.

Advocate NU Khan, who was representing the petitioner at the high court for quashing proceedings, stated that she resided near a police training centre and firing range in Sangli and that her small daughter could have picked up the cartridge and placed it in her luggage.

This argument was accepted by the Court, and it was determined that the possession was not conscious. As a result, the proceedings against her at the Sahar Police Station were quashed.