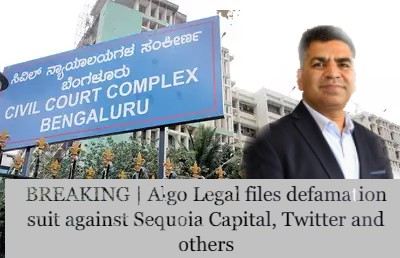 Following news of Sequoia Capital’s decision to cut relations with Algo Legal, the firm and its founder Sandeep Kapoor have launched a defamation complaint in a Bengaluru court against the firm as well as other media sites which will be heard by City Civil and Sessions Judge MH Annayyaanavar for orders on June 7th.

Sandeep Kapoor and Algo Legal were represented by Senior Advocate Uday Holla, who was briefed by Anupama Hebbar of Keystone Partners.

The following media businesses and journalists have been sued by Sandeep Kapoor and Algo Legal.

Sandeep Kapoor, the former general counsel of Sequoia Capital, created Algo Legal in 2019. According to his LinkedIn biography, he worked at Sequoia for nearly nine years till 2019.

Kapoor allegedly threatened some Sequoia portfolio businesses with criminal charges under the Foreign Exchange Management Act (FEMA), as well as investigations by the IRS, the Enforcement Directorate (ED), and other government agencies.

Kapoor was also accused of using his previous position as Director Legal at Sequoia to compel these portfolio firms to use his firm (Algo Legal) or linked entities for all legal services.