Breaking | In a terror funding case, the Delhi court sentenced Yasin Malik to life in imprisonment. 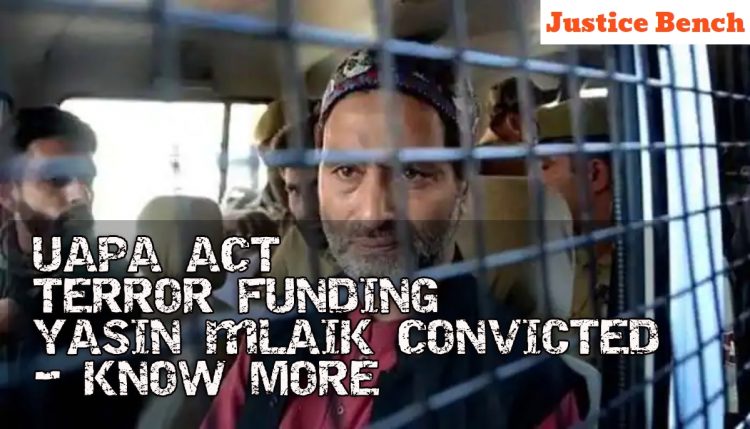 Breaking | In a terror funding case, the Delhi court sentenced Yasin Malik to life in imprisonment.

The Patiala House court in the case of NIA v. Yasin Malik found Malik guilty of violating the Unlawful Activities Prevention Act (UAPA) and the Indian Penal Code, after him pleading guilty.

Yasin Malik, the leader of the Jammu Kashmir Liberation Front and a Kashmiri separatist, was sentenced to life in jail by a Special National Investigation Agency (NIA) Court in Delhi on Wednesday in a terror funding case.

After pleading guilty in the case, Special Judge Parveen Singh convicted Malik on May 19 of violating the Unlawful Activities Prevention Act (UAPA) as well as the Indian Penal Code (IPC) for plotting and waging war against India.

The following are the punishments meted out to Malik for various offences:

Section 121 IPC (waging war against the Indian government) carries a maximum sentence of life imprisonment and a monetary penalty of INR 10,000.

The sentences will all run at the same time.

The amicus curiae was said to have visited the accused in prison to have legal consultations with him so that he could be informed of the highest punishment that might be imposed on him if he entered a guilty plea and the benefits and drawbacks of his plea.

Malik also pleaded guilty to the allegations levelled against him after that.

The Court noted that Malik had pleaded guilty to the accusations against him freely and after adequate legal consultation and full knowledge of the implications.

His plea is accordingly accepted

The Court had already framed accusations in March after finding that Malik and Shabir Shah, Rashid Engineer, Altaf Fantoosh, Masrat, and the Hurriyat/Joint Resistance Leadership (JRL) were the direct recipients of terror financing.