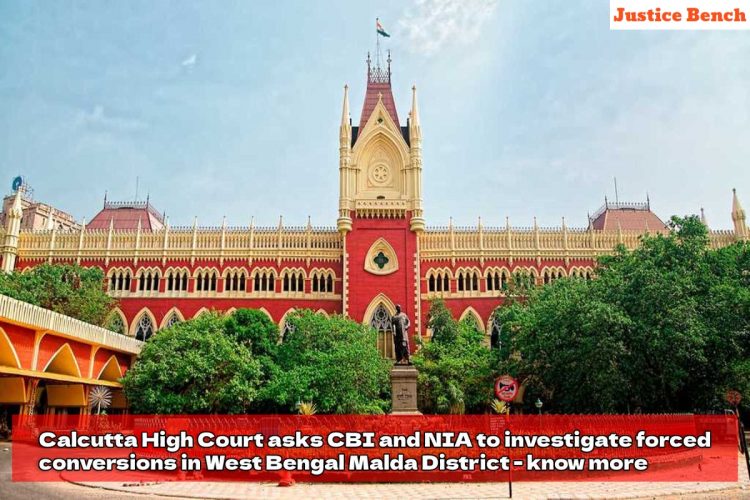 The Calcutta Court was heard a plea in Smt Kalabati Mondal v. Union of India by two women claiming that their husbands were forcibly converted to Islam as part of the punishment for supporting a rival political party.

On Thursday The Calcutta High Court ordered the Central Bureau of Investigation (CBI) and the National Investigation Authority (NIA) to investigate the issue of forced religious conversion in West Bengal’s Malda district.

the Bench Comprising Justice Rajasekhar Mantha sought inputs from the agencies with regard to allegations of forced conversions, cross-border infiltration, threats and intimidation by accumulation and storage of huge quantities of arms and ammunition, and counterfeit currency.

“Since the NIA and the CBI are the party respondents to the instant proceeding, appropriate inputs may be given from their side as regards the allegations made in the writ petition,“

Additionally, the court direct the Superintendent of Police (SP), Malda to cooperate with the two agencies.

A petition was filed by two sisters who alleged that their husbands were missing since November 2021, who worked for a political party that had recently lost the assembly elections, accordingly the court passed orders.

The Petition further claimed that the two were forcibly converted to Islam as part of a punishment for supporting a rival political party.

On the Other hand, the state had contended that the husbands had converted to Islam voluntarily, and had deposed to that effect under Section 164 of the Criminal Procedure Code (CrPC). Additionally, the state submitted that the petitioner’s husband also refused to return to their residences, the State submitted.

Moreover, it was the petitioners’ stand that these statements were mysterious and could not be countenanced.

The Court expressed surprise at the fact that the police station had not registered first information reports (FIRs) or ordered any steps as per the Supreme Court’s judgment in Lalita Kumari v. Govt of UP & Ors after observing the submissions,

As a result, the court ordered the SP of Malda to independently provide a full report on the petitioners’ claims, police actions, and any other vital material that would be required to resolve the problems stated in the petition.

“A detailed chronology of events before and after receipt of complaints from the petitioners may also be set out by the SP,“.

After discovering that the CBI and NIA were parties to the petition, the agencies were asked for their views on the charges in the plea, as well as other related matters.

“The aforesaid allegations may not be directly in issue to the claim of the writ petitioners but appear vitally linked to the allegations of abduction and forcible conversion of the petitioners’ husbands.”

The SP was also ordered to examine the petitioners’ security and take prompt action in that respect since they apprehended a threat to their lives.

With this, the case was adjourned and listed on June 21.