Calcutta High Court, The jute industry is a national pride that must be revitalised – know more 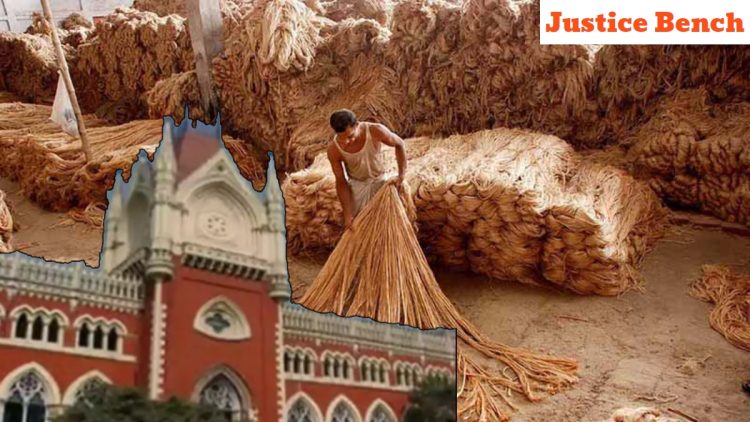 Calcutta High Court, The jute industry is a national pride that must be revitalised- know more

The Calcutta High Court while hearing a plea in Indian Jute Mills Association vs Union Of India which was filed contesting the Jute Commissioner’s rate for mills to procure raw jute.

The Calcutta High Court has stated that the jute industry is a national pride and that all stakeholders must work together to not only save but also revive it.

Taking note of the financial losses suffered by jute mills, the bench comprising Justice Amrita Sinha ruled that all government agencies must support the Jute Commissioner in prosecuting individuals who hoard the raw fibre.

All the parties who are a part of the jute industry need to adopt a holistic approach and devise means not only to save but to revive the industry which is the pride of our country, especially Bengal. Reviving the industry will undoubtedly be a herculean task and joint effort of all stake holders is extremely important,”

The Jute Commissioner is compelled by law to lead from the front, according to the Court.

The Indian Jute Mills Association had filed a lawsuit challenging a notification issued by the Union Ministry of Textiles’ Jute Commissioner in June of last year under the Jute Textiles Control Order of 2016.

According to the notification, the Jute Commissioner has set a suitable price for raw jute in West Bengal for the TD-5 variety at INR 6,500 per quintal.

The notification said that no dealer, trader, agency, or supplier, or any other person, shall sell or offer to sell any person or agency, and no person, agency, or firm shall offer to purchase or purchase any raw jute at a price higher than the notification’s reasonable price.

The petitioners, who included over 35 jute mills, said that the commissioner’s rate was not reasonable since it did not account for freight, transit, processing, and storage costs of raw jute, and therefore was in violation of the 2016 Control Order.

It was argued that the fixed price is ridiculously low and cannot be implemented even with coercive means.

The petitioners claimed that because the set cost was not reasonable, they were obliged to pay more for raw jute.

Because they are unable to sell their finished products on the open market and must instead sell finished jute bags in bulk to the government, most mills have been forced to close.

As a result, a prayer was said to ask the authorities to re-set the prices.

After hearing the arguments, the single-judge remarked that the Court was not an expert body to set the price of any goods, and that the Jute Commissioner was in charge of that.

“An onerous duty is cast upon the Jute Commissioner. It is not only his statutory duty but an obligation to fix the price of raw jute after taking into account the relevant considerations and to adopt all necessary methods to implement the said price, otherwise the price fixed will lose its relevance and the purchasers will be left at the mercy of the traders who are openly selling the product at rates higher than the notified rate,”

The judge went on to say that “something is wrong somewhere” because the price of raw jute was rising rather than falling.

“There must be some loop holes which are required to be plugged. But who will bell the cat, is possibly the next relevant question. Taking advantage of the difference between the State and the Central, the hoarders and black marketers are taking active role in selling raw jute at an exorbitant rate,”

The judgement went on to say that increasing the notification rate would not solve the mills’ problems.

“A check and balance is to be maintained. With a rise in the notified rate, the government will be liable to reimburse the mill owners the higher rate, which in turn will put a pressure on the exchequer and most likely, the higher rate will not reach the hands of the poor cultivators and will fizzle out in the middle rung,”

As a result, the judge ordered the Jute Commissioner to take proactive measures and impose strict penalties in order to execute the announced rate.

Even yet, if it appears that the notified rate will not be met, the Court requested that he examine and re-fix the rate after taking into account the relevant considerations listed in the 2016 Control Order.

The State was represented by Susovan Sengupta and Manas Kumar Sadhu.