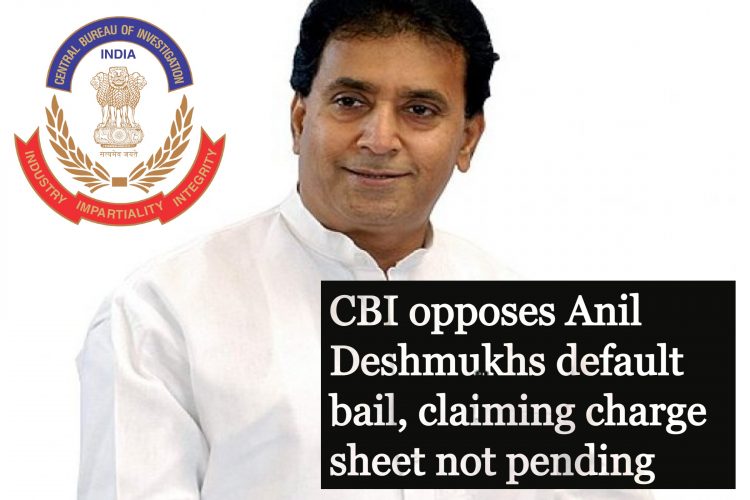 The Central Bureau of Investigation (CBI) has opposed former Maharashtra Home Minister Anil Deshmukh and his aide Sanjeev Palande’s request for default bail in a corruption case filed by the central agency against them in a Mumbai court.

Deshmukh and Palande sought bail on the grounds that the CBI’s chargesheet was incomplete, as it was only 59 pages long, and that papers and annexures that should have been included in the chargesheet were never filed.

As a result, they argued they were entitled to use the statutory bail remedy provided by Section 167 (2) of the Code of Criminal Procedure (CrPC).

The CBI, on the other hand, has refuted this claim, claiming that the chargesheet is not incomplete as reported.

“The supply of the final report to the accused under Section 207 of the Code of Criminal Procedure has no nexus with Section 167(2) of the CrPC for default bail. It is wrong to contend that the investigation has not been completed within 60 days of the arrest of the accused. The police report has been filed by CBI before the Court on June 2 as is borne out by the roznama,”

It was also claimed that, as required by law, the Special Court had received a thorough police report in terms of the chargesheet.

Mere delay on account of other compliance to file the documents relied upon with the police report cannot take away the fact that a police report has, in fact, been filed within the stipulated period prescribed by law,”

The CBI maintained that simply because materials were not filed with the chargesheet did not indicate it was incomplete.

Furthermore, according to the CBI, the court that ordered them to deposit the remaining documents on or before June 7 did so after examining the charge sheet brought before it.

Deshmukh and Palande also took issue with the CBI’s failure to provide them with copies of the chargesheet and other documents, as required by Section 207 of the CrPC.

Based on the findings of the preliminary probe into Dr. Jaishri Patil’s accusation, the CBI filed an offence against Deshmukh and unknown others.

The investigation was launched when the Bombay High Court issued a direction to that effect on April 5, 2021, in response to a petition submitted by Param Bir Singh, former Commissioner of Mumbai Police.

Deshmukh was identified in the FIR after the probe, along with his personal secretary Sanjeev Palande, personal assistant Kundan Shinde, and fired Mumbai Police officer Sachin Waze, whose identities were later added.

The Enforcement Directorate (ED) first arrested Deshmukh and others in November 2021 in connection with the same investigation, but for money laundering offences under the Prevention of Money Laundering Act (PMLA).

The CBI later detained them in the first week of April of this year.

They were detained by the CBI till April 16, when they were remanded to judicial custody.