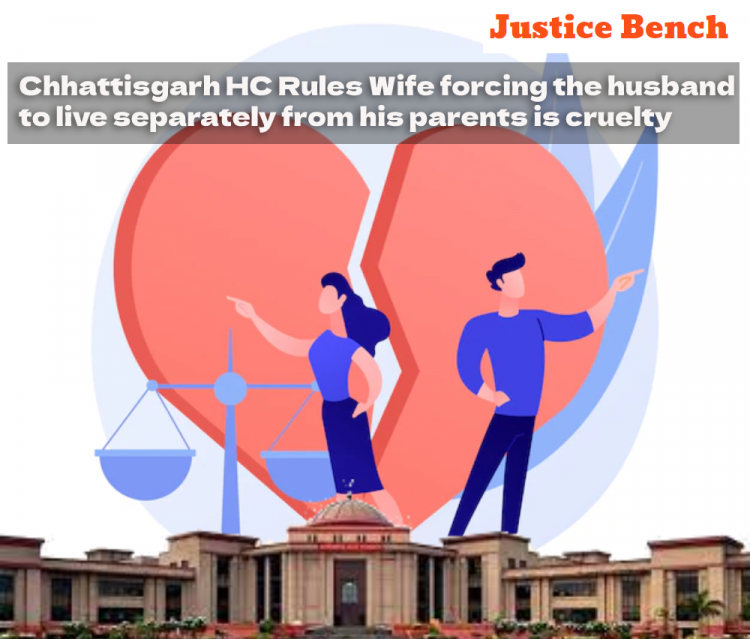 if wife persistently creates constraints upon husband to get separated from his family and to live with her at her parental house and also threatened him that, otherwise she will implicate him in dowry case, it, itself amounts to mental cruelty on the husband

The Chhattisgarh High Court recently significantly ruled in Shailendra Kumar Chandra vs Bharti Chandra case that if a wife forcibly insists her husband get separated from his parents and threatens to implicate him in a false dowry demand case, it would amount to mental cruelty.

The division bench comprises Justices Goutam Bhaduri and NK Chandravanshi while hearing a petition filed by a husband challenging the order passed by a Family Court in Korba, date February 21, 2017, passed these orders. Accordingly, the plea of the petitioner seeking divorce on the ground of cruelty was rejected.

The Bench observed from the evidence on record, that the marriage of the couple hardly worked for two months before differences cropped up between them. The wife often left her matrimonial house and went to her parental house.

Even the petitioner’s uncle insisted him to live in his house instead of the matrimonial house. However, the husband made several attempts to reconcile but in vain.

Judges stated that “It seems that the wife belongs to higher strata in their society in respect of financial status comparatively than the husband, hence, she wants to live with him but not along with her in-laws. And, therefore, she always creates mental pressure in this regard on him and has threatened also to fasten him in a dowry case,”

The Bench further observed that the petitioner’s father was an old aged retiree employee and he also has a younger brother.

Accordingly, the court held that

“In such a lower middle class family, it is the responsibility of the eldest son (as the husband is, in the instant case) to take care of his elderly parents, as he has deposed also in his statement. In such a situation, if wife persistently creates constraints upon husband to get separated from his family and to live with her at her parental house and also threatened him that, otherwise she will implicate him in dowry case, it, itself amounts to mental cruelty on the husband,”

The Court arrived at this finding, the bench noted the settlement deed for conjugal rights, in which the wife had specifically stated that she would live with the husband only if he lives separately from his parents.

The bench also took exception to the observations of the Family Court wherein it had said that since no police complaints are lodged, there are chances of the couple to settle together in the future.

The High Court further said that the Family Court was unjustified in making such an observation.

The Bench has expressed its Opinion that

“We have no hesitation to hold that the Family Court was highly unjustified in making such observation. The Family Court has taken the role of a councilor rather than an adjudicator while doing so. It is after much efforts and counseling that a case comes up before the court for adjudication. Then the role of the court is to adjudicate the issue involved in the case based on the evidence after duly appreciating it. The Family Court is not supposed to advice the remedies to the parties or dispose of the case on the probabilities of leading happy marital life in future,” .

Accordingly, the bench granted a decree of divorce on grounds of mental cruelty to the husband.