Courts should review wills from the perspective of laypeople rather than lawyers: Delhi High Court 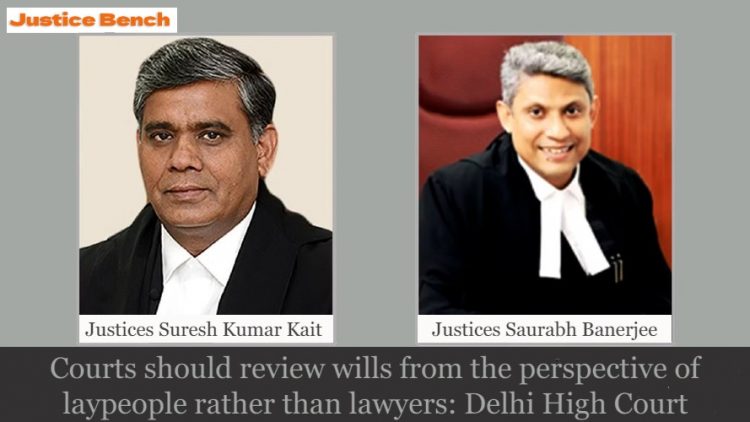 Courts should review wills from the perspective of laypeople rather than lawyers: Delhi High Court

In the recent case of Vikrant Kapila & Anr v. Pankaja Panda & Ors., the Delhi High Court division bench of Justices Suresh Kumar Kait and Saurabh Banerjee declared that a will must be interpreted harmoniously, giving each clause equal weight, benefit, and uniformity.

The Court stated that each clause in a will has a unique value, much as each sailor on a ship has a unique duty to perform, and that clauses in wills are like sailors on a ship sailing in the same direction.

In our opinion, for reaching a final culmination with respect to interpretation of a Will it is imperative for the Court to look at it from the eyes of a layman rather than a lawman,”

The Court stated that disagreements about how to interpret a will have been brought before the courts from the beginning of time, and that although these doors have been successfully shut by successive rulings, the problem will sadly never be resolved.

The Court went on to say that in order to reach a decision as practically as feasible, it must look behind the curtain and raise the veil in order to determine the testator’s true intention and to acknowledge the beneficiaries’ rights to adjudicate disputes.

The Court further stated that it is important to keep in mind that certain clauses in the Will may overlap or conflict with one another. Because these clauses cannot be changed and the testator cannot be asked for an explanation, care must be taken to ensure that these clauses do not contradict one another.

n case the clause(s) are inconsistent and a divergent meaning is possible, the order of precedence should be followed, i.e., the more powerful/meaningful clause(s) is to take precedence over the less meaningful clause(s). When there is a clause bequeathing absolute rights then the same cannot be followed by other clause(s) with restricted rights. An absolute right is an outright recognition which cannot be fettered by imposing a condition in the form of a restrictive right,”

The bench ruled that when a clause’s words can be read in multiple ways, it is best to choose and interpret them in a way that is most likely to be plausible and constructive for everyone as a whole in order to draw a “single straight line” with no breaks rather than reverting to an interpretation that is implausibly destructive and works against everyone’s best interests.

It further stated that all words should be taken into consideration as essential and that all sentences should be reconciled with one another and read collectively as if they were all a part of the same document.

The bench explained that if doing the same thing is not practicable for some reason, the better interpretation should be used to bring an end to the conflicting circumstances.

The appeal, which contested the sole judge’s decision and preliminary decree based on Sheila Kapila’s will, which set aside a 25% equal portion for each of her children before selling it and dividing the revenues among them, was before the bench.

Conflict erupted because Sheila Kapila’s son passed away and left a Will leaving little for his two children and everything to his second. They submitted an appeal arguing that Sheila Kapila’s four children only received a limited bequest under her will but they, together with the rest of the testator’s grandchildren, received an absolute bequest.

The judges stated at the outset that,

A Will will be a Will only when it will lay to rest the wishes of who is at rest,” and that it will be their endeavour to proceed so that the “will of who lays at rest is put to rest”

Following consideration of the arguments, the court concluded that there is an absolute bequest in favour of the four children and that the phrases and language employed in the will are neither cryptic or ambiguous.

Finding no infirmity, perversity or illegality in the Impugned Judgment dated 10.05.2022 passed by the Learned Single Judge qua the interpretation of the Will in question, we find there are no grounds of interference by this Court.

As a result, the appeals were dismissed.