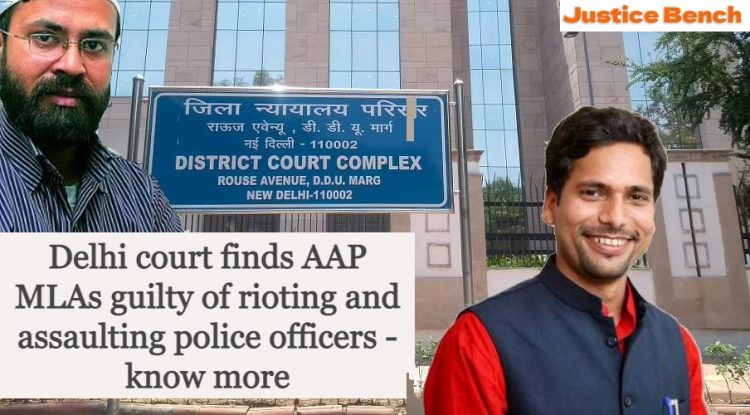 A Special Court in Delhi, which hears cases involving MPs and MLAs, found two Aam Aadmi Party (APP) politicians and 15 others guilty of participating in an assembly, rioting, and injuring police officers at a police station seven years ago. They now face jail terms.

On the evening of February 20, 2015, a rumored crowd allegedly attacked police officers at Burari police station and caused property damage. The problem occurred after two guys were caught and taken to the police station, and the crowd sought their custody in order to reportedly beat them up.

According to the police, they attempted to disperse the crowd, but the MLAs joined the throng, turned on them, and started throwing stones. The defence relied on 14 witnesses to establish innocence while pointing out “significant contradictions” in the testimony of prosecution witnesses, but the prosecution examined 24 witnesses to support its claims that the statements were consistent.

The defense counsel for the accused people contended that they had gone to the police station to diffuse the situation rather than instigating or provoking the mob.

The court emphasised the prosecution witnesses’ “constant” evidence regarding the two lawmakers’ attendance at the scene of the incident, which showed that they were not only “active participants, but in fact commanding the crowd.”

Additionally, it was claimed that the two individuals incited the crowd with the intention of “teaching police officials a lesson and overpowering the police by force” as part of a “common object of the unlawful assembly”.

The charges of criminal intimidation and property damage were dropped, but they were found guilty of the offences listed in Sections 147 (rioting), 186 (obstructing a public servant from discharging of public functions), 332 (voluntarily causing hurt to deter public servant from his duty), and 149 (every member of unlawful assembly guilty of offence commit­ted in prosecution of common object).

On September 21, the court will consider the issue of sentence duration.