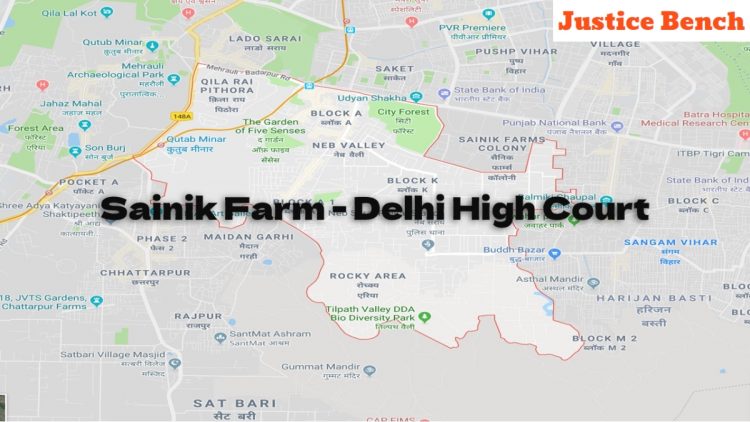 But the government can’t be so reluctant to decide the issue, the Court said

On Tuesday The Delhi High Court asked the Central government whether it will take responsibility for any loss of life in Sainik Farm because of the embargo on carrying out repairs to old buildings in the area.

A Division Bench comprising Acting Chief Justice Vipin Sanghi and Justice Navin Chawla questioned the government on its indecision which has kept the issue in limbo for years and said that the Court will not come in its way if it wants to demolish the colony.

Further, the court said that But the government can’t be so reluctant to decide the issue, the Court said.

“Suppose the structure falls, who will take the responsibility? Take a pragmatic view of the situation. If you have taken a decision not to regularise, please go with your bulldozers. Why is the government so reluctant? How can this be the state of affairs,” the court remarked.

Additional Solicitor General (ASG) Aishwarya Bhati informed the Court that the government is seized of the matter but a conscious decision has been taken at the moment to first regularise around 1,800 non-affluence colonies in the national capital and that a decision on Sainik Farms along with 68 other affluent neighbourhoods will be taken after the first process is complete.

However, the Court stated that even though the government has directed the residents not to do any repair work, at least some work should be allowed and there cannot be a situation where the government can say that it will not demolish the structures and won’t allow the repair work.

“We don’t understand why you have a problem. They are differently situated. There is an intelligible differentia. We get that. You are thinking somebody will challenge you if there is a different policy for them. Whether you do it now or later if there has to be a challenge it will be there. You are talking about regularising 1700 colonies; it will take decades and decades. This development process is not going to get over in the next decade,”.

The Court asked the central government to explore the possibility of evolving a mechanism where there is credible vigilance when it comes to granting permission to carry out repairs.

ASG Bhati said that she will obtain instructions on the issue.

The court said that the matter will now be considered on July 6.

The petition was filed by the Ramesh Dugar in 2015, convener of area development committee Sainik Farm filed seeking regularisation of the neighbourhood and permission to carry out repair works in the homes.The Sainik Farms is an upscale affluent neighbourhood in South Delhi.

It was organised in the year 1960s and mostly comprises the houses of retired Army Officers. However, it has also been embroiled in controversy as questions have been raised over whether the lush green neighbourhood is built on forest or government land.

The Delhi High Court had passed several strictures earlier in this regard and the area has been dubbed the ‘Republic of Sainik Farms’ by many as it is supposed to have its own electricity, water supply lines and security.