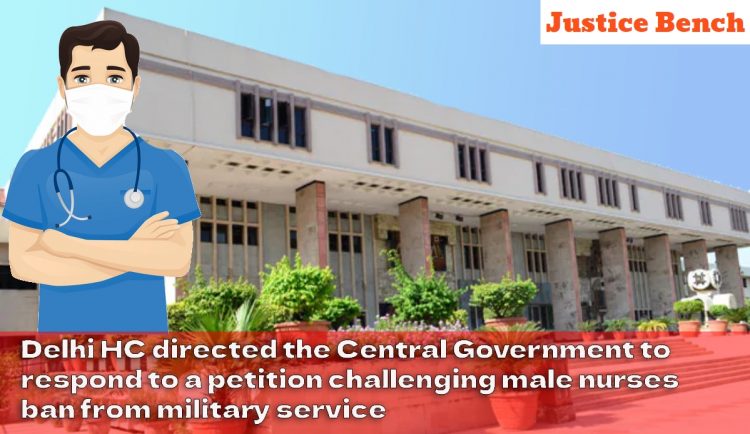 The Delhi High Court in Indian Professional Nurses Association v. Union of India was considering a petition challenging the restrictions of the Military Nursing Service Ordinance, 1943, which purports to limit military employment to female nurses only.

The Division Bench Comprising Acting Chief Justice Vipin Sanghi and Justice Sachin Datta instructed the Central government to respond to the plea within six weeks and adjourned the case till July 28.

“Issue notice. Reply to be filed within six weeks. Rejoinder before the next date. List for further hearing on July 28,”

During the hearing, the Court stated that it was only dealing with the challenge to the legislation that bars female nurses from serving in the Indian military.

Advocate Amit George, appearing on behalf of the petitioners, claimed that the ordinance in question fully prohibits men from serving as nurses in the Indian military and only allows women to do so.

The petition further argued that the Indian Professional Nurses Association was seeking redress for the clearly discriminatory and illegal treatment of male nurses in India as a result of the unconstitutional and illegal practise of having a military nursing service made up entirely of female nurses.

A new job advertisement for ‘female candidates only’ who have registered and are appearing for NEET (UG), 2022 for admission to the four-year BSc Nursing Course was put out at the Armed Forces Medical Services Colleges of Nursing while the matter was still pending before this Court, according to the plea (AFMS)

It was also stated that the advertisement stated that the deadline for submitting applications was May 31, 2022, and that it was manifestly impermissible for the respondents to continue the illegal and abhorrent gender discrimination practise while the case was still pending adjudication before the Court.

The Union of India was represented by Advocate Manish Mohan.