Delhi High Court dismissed a plea against Anurag Thakur, and Parvesh Verma and held that Mass Leaders must conduct themselves with the utmost integrity 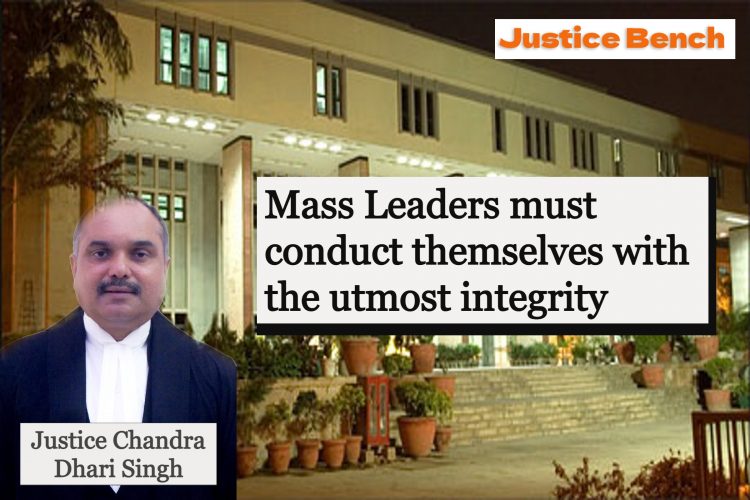 Delhi High Court dismissed a plea against Anurag Thakur, and Parvesh Verma and held that Mass Leaders must conduct themselves with the utmost integrity

While rejecting a petition filed by CPI(M) leaders Brinda Karat and KM Tiwari seeking the registration of a first information report (FIR) against BJP leaders Anurag Thakur and Parvesh Verma for alleged hate speech, the Delhi High Court emphasised that mass leaders who hold high public offices must conduct themselves with the utmost integrity and responsibility.

Justice Chandra Dhari Singh began his ruling with a shloka (verse) from the Bhagwada Gita, which states, “Whatever deed a leader performs, common persons follow in his footsteps; and whatever standards he sets by his conduct, his subjects pursue.”

“The persons who are mass leaders and occupy high offices must conduct themselves with utmost integrity and responsibility. Leaders elected in a democracy like that of India, owe their responsibility not only towards the electorate in their own constituency, but also towards the society/nation as a whole and ultimately to the Constitution. It is they who are the role models for the ordinary masses. Thus, it does not befit or behove the leaders to indulge in acts or speeches that cause rifts amongst communities, create tensions, and disrupt the social fabric in the society.”

The Court express its opinion on conduct of the role of leaders occupying high offices.

The Court, on the other hand, dismissed the argument, holding that High Courts should not use their extraordinary writ power under Article 226 of the Constitution on a regular basis if a more effective and efficacious alternative remedy is available.

The ruling came in response to Karat and Tiwari’s appeal of an Additional Chief Metropolitan Magistrate (ACMM) Court order dismissing their appeal.

“The High Courts have been flooded with writ petitions praying for registration of FIRs or praying for a proper investigation. If the High Courts entertain such writ petitions, it will open pandora’s box and would crumble the already overtaxed system. Therefore, the alternate remedies wherever available must be exhausted, save in exceptional circumstances where the urgent intervention of this Court is required in the interest of justice, before approaching this Court,”

The Court Stated in it’s order

The High Court ruled that, under Section 196 of the Code of Criminal Procedure (CrPC), the government must provide adequate penalties when the leaders are accused of crimes.

Section 196 of the Criminal Procedure Code deals with prosecution for crimes against the state and criminal conspiracy to commit such crimes, as well as the requirement of government sanction.

Following that, Justice Singh looked at numerous precedents, legal provisions, and the circumstances surrounding the plea, which had challenged a Magisterial Court ruling denying an application under Section 156(3) of the CrPC seeking the registration of a FIR against the leaders.

It was noted that the CrPC provided a “alternative” and “effective” remedy that had to be used before claiming the High Court’s writ jurisdiction.

“Thirdly, in the instant case, the ACMM has rightly decided the application before it. The provisions of Section 156(3) for directing investigation qua offences mentioned in Section 196 of the Code cannot be exercised by the Court without sanction. There is no prima facie irregularity that is apparent upon a perusal of the impugned order. Fourthly, the petitioners have failed to satisfy the Court and no case is made out warranting the intervention of this Court at this stage,”

The High Court clarified that, while the petition of the left leaders was maintainable, it did not warrant the exercise of writ jurisdiction because no fundamental or legal rights had been violated that would have required the Court’s intervention in the case of the right to report a cognisable offence.

According to the High Court, there was no “gross illegality” in the proceedings before the ACMM.

“Section 156(3) remedy had been availed of wherein the ACMM after having taken note of the status report filed by the investigating agency and applying its judicial mind to the complaint dismissed the same. Third, as discussed in the foregoing paragraphs, the petitioners have failed to follow the prescribed mechanism under the Code,”

The court noted that each institution has a purpose to serve in a democratic and constitutional framework guided by the rule of law while discussing the purpose of institutions. The mission of investigating agencies, such as the police, was declared to be sui generis, or one-of-a-kind.