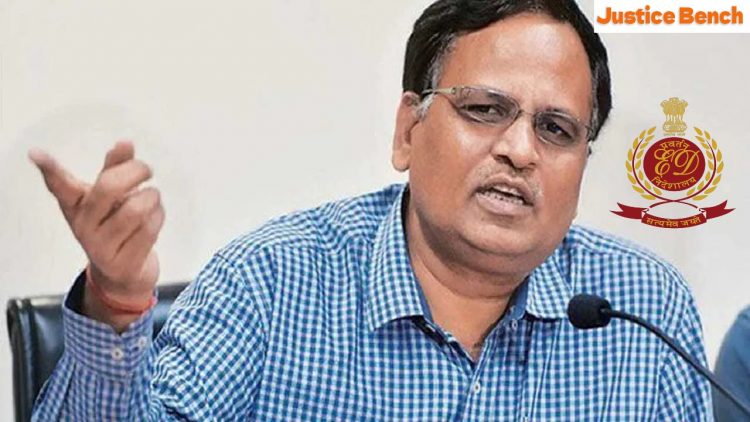 The Delhi High Court Bench comprising Justice Yogesh Khanna has reserved its verdict on a petition by the Enforcement Directorate (ED) contesting a lower court judgment allowing a lawyer to accompany Delhi Cabinet Minister Satyendar Jain during his interrogation in a money-laundering case.

The ED’s Additional Solicitor General (ASG) SV Raju contended that because Jain is not yet a defendant in the case, he cannot be accorded Article 20 protection.

Even if a person is arrested, according to the ASG, he will only become a “accused” after being identified in the FIR or complaint.

“We anyways have facilities for video recording but he (Jain) has given a written statement saying he does not want this facility. I can submit his statement in a sealed cover as well,”

“They have repeatedly called me an accused. Their remand application starts with the word accused. I am searching for his certificate of not being an accused,”

Singhvi went on to say that the petition is an abuse of the legal system and that it should be dismissed with costs.

“They have had a lawyer present during his investigation at a distance for the last few days. It has been going on without any issue. This petition is an abuse of process of law and should therefore be dismissed with costs.”

Last Thursday, a special court gave ED custody of Jain until June 9. However, at the request of Jain’s lawyer, the Court ordered that a lawyer be present throughout Jain’s interview from a distance so that he may watch but not hear the proceedings.

The ED then challenged the condition in the Delhi High Court, claiming that it would invalidate Jain’s remand to the agency.

On Thursday, the plea was heard before Acting Chief Justice Vipin Sanghi’s Bench, and it was scheduled for an urgent hearing today.

Jain, who was being investigated by the Central Bureau of Investigation (CBI) in a corruption case, was apprehended by ED sleuths in a connected money laundering case.

According to the ED, he is involved in a money laundering case, and it is unclear who the recipients of the laundered funds are. It’s also said that this isn’t a one-time occurrence.