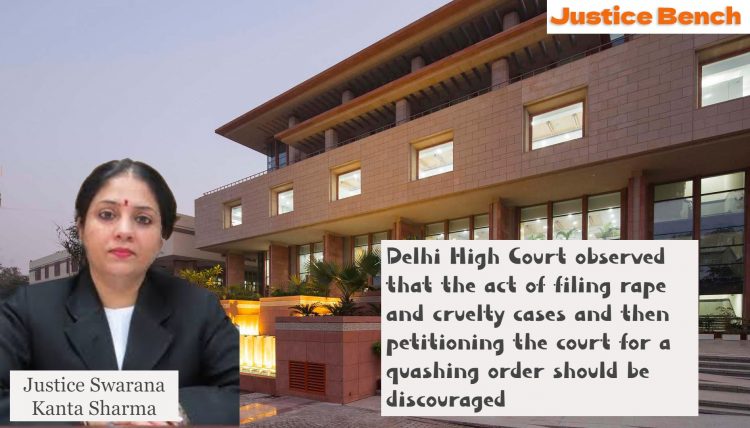 On Monday the Delhi High Court Bench comprising Justice Swarana Kanta Sharma in the case of Arshad Ahmad & Ors v. State of NCT of Delhi observed that the practise of registering cases under Sections 376 (rape), 354 (assault on a woman), and 498A (husband or relative of husband of a woman subjecting her to cruelty) of the Indian Penal Code (IPC) and later bringing them to court for quashing should be discouraged.

After the parties reached an agreement, the court quashed a First Information Report (FIR) filed by a woman under these Sections against her father-in-law.

“The fact that now-a-days Sections 376 and 354 of IPC are being used along with Section 498-A IPC, which later on are compromised and are brought to this Court for quashing, needs to be curbed,”

In ordinary circumstances, cases under Section 376 IPC should not be quashed and should be viewed as crimes against society at large, the court stated.

However, in the unusual circumstances of this matrimonial dispute case, where the woman stated that her future depends on the quashing of the FIR and that no rape was committed against her, the Court ruled that it will be in the interest of justice if the FIR is quashed in its entirety.

The Court was hearing a petition to quash a FIR registered under Sections 376/377/498-A of the IPC. The charge-sheet was filed under Section 376 of the IPC, but the complainant stated in her statement given under Section 164 of the Code of Criminal Procedure (CrPC) that her father-in-law only attempted to rape her.

The complainant informed the Court that she has now entered into a compromise of her own free will and has no objection to the FIR being dismissed.

According to Justice Sharma, any case that is resolved is a positive step because it reduces the number of cases pending in the courts. The Court praised the complainant’s stance and stated,

“The complainant is a young lady who is looking for a bright future for herself, which depends on quashing of the present FIR pursuant to a settlement which she states before this Court, she has entered out of her free will and without coercion, pressure or threat. She also states that it was a family dispute and she no more wants the same to be tried in any Court of Law in any form.”

Despite the fact that the complainant had received a demand draft for 10 lakh towards the compromise, the Court decided to dismiss the case, believing that doing so would ensure a better future for all parties.

However, given the “overall facts and circumstances of the case,” the Court ordered the petitioner to deposit $12,500 in the Delhi High Court Advocates Welfare Fund within a week.

Senior Advocate Arun Bhardwaj appeared for the petitioners, as did Advocates Abhishek Sharma and Rahul Sharma.