Delhi high court ruled that under the UAPA, smuggling gold that poses no threat to India’s economic stability is not a terrorist act 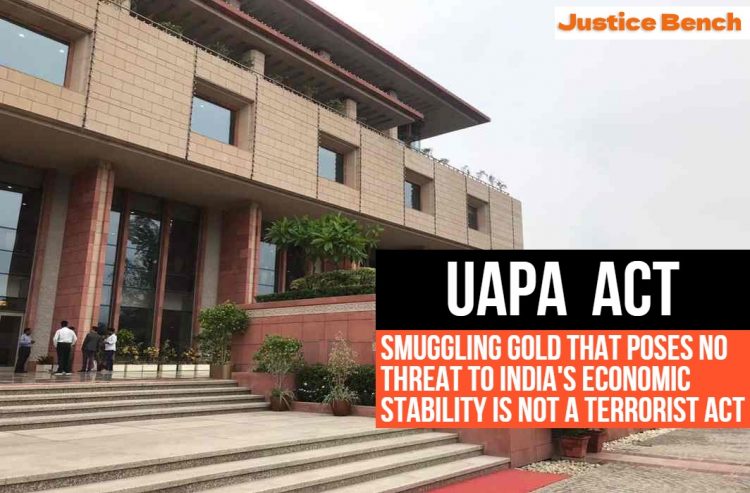 The Delhi High Court bench comprising Justices Mukta Gupta and Mini Pushkarna ruled that smuggling gold that does not endanger India’s economic security or monetary stability does not constitute as a terrorist act under the Unlawful Activities Prevention Act (UAPA).

As a result, a Division Bench granted bail to nine men accused of smuggling 83.6 kilogrammes of gold seized at the New Delhi Railway Station in 2020.

The bail application of nine persons who were apprehended by the Directorate of Revenue Intelligence (DRI) in August 2020 after being caught with over 500 gold biscuits was heard in the High Court (83.6Kg). They were travelling on the Rajdhani Express between Dibrugarh and New Delhi with forged passports.

The matter was eventually taken over by the National Investigation Agency (NIA), which accused them with violating multiple sections of the Indian Penal Code (IPC) as well as the Unlawful Activities Prevention Act (UAPA).

A special court refused their bail in May 2021, after the lower court denied it.

The appeals stated that the prosecution had no evidence against them other than comments made under Section 108 of the Customs Act, which could not be accepted and were inadmissible in a UAPA trial.

The advocate contended that there was no evidence on the record that the gold was obtained from a foreign source.

Additional Solicitor General (ASG) SV Raju, appearing for NIA, cited to the Statement of Objects and Reasons for amending Section 15 of the UAPA by adopting Section 15(1)(a) (iiia).

He stated that the amendment was made in response to the Financial Action Task Force (FATF) recommendations, and that this report clearly stated that gold is a universally accepted currency that can be traded anonymously, and that such transactions would be difficult to trace and track, posing a serious threat to the country’s economic security.

As a result, he contended that the appellants engaged in a bigger conspiracy to commit a terrorist act by disrupting the country’s economic stability, and that, given the gravity of the crime, bail should not be granted to the appellants.

However, because no death has occurred in this case, Clause ‘b’ of Section 16 of the UAPA, which provides for a minimum punishment of 5 years’ imprisonment with the possibility of life imprisonment, will not be applied.

As a result, The Court granted bail to all of the accused on the condition that they post a personal bond and a surety of Rs. 1 lakh. They were also told to hand up their passports to the trial court and not to leave the country without permission.