Demolition in Prayagraj, Javed Mohammad’s wife received a notice that was back-dated and created with the admin’s help for the Allahabad High Court. 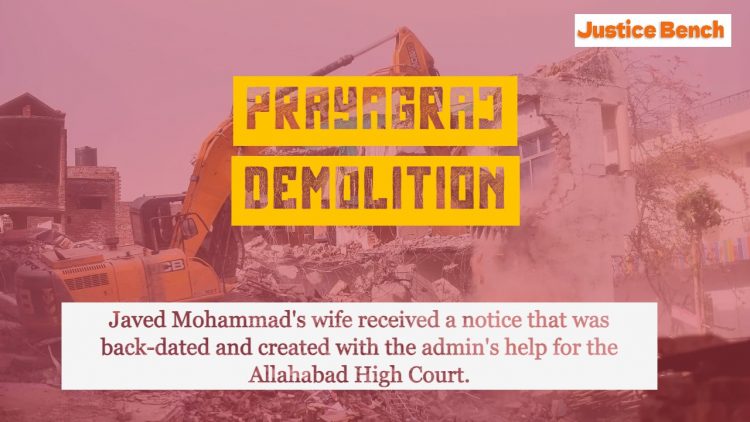 The wife of activist Javed Mohammad, who is charged in the Prayagraj violence case, filed a petition in Parveen Fatima v. State of UP on Monday, but the case was supposed to be heard on Tuesday. She is challenging the Prayagraj Development Authority’s (PDA) decision to demolish their home earlier this month.

Parveen Fatima asserted ownership of the house that the authorities had torn down in her plea. She claimed that she had never received a warning before the demolition and that the notice had actually been sent in her husband’s name.

It was further argued that on the evening of June 11, when the house was shut due to her and her husband’s arrest and detention, the local police slapped the notice on the property’s front wall. Fatima has claimed that because Mohammad was not even the owner of the house, the authorities could not issue a notice of demolition in his name.

Fatima, on the other hand, has argued that neither she nor her husband received any such notices.

It was asserted that the June 10 notification was back-dated and created with the district administration’s cooperation to support the house’s demolition. The argument continues by claiming that the justification supplied by the authorities for the demolition was surprising since it violated both the Constitution and the rule of law. It was emphasised that a person’s home could not be demolished following a trial, much less on the basis of a mere allegation.

According to Fatima, she and her daughter, who is 19 years old, were detained around midnight, in violation of the Criminal Procedure Code’s (CrPC) rules and the Supreme Court’s ruling in DK Basu v. Union of India. Furthermore, the arrest was contested as being unlawful because no first information report (FIR) or warrant for their arrest had been issued.

On these grounds, the petitioner requested that government accommodations be made for her and her family, that her home be rebuilt, that she be compensated for the loss of her home and reputation, that she be released from her illegal detention, and that the officers in charge of the alleged illegal demolition face disciplinary action.

After violence broke out in Prayagraj amid demonstrations against remarks made against Islam by BJP politician Nupur Sharma, Mohammad was brought into arrest on the evening of June 10. The police alleged that Muhammad started a fight in which several Muslim teenagers threw rocks at them. Additionally detained and released a day later were Mohammad’s wife Fatima and daughter Summaiya. The municipal authorities in Prayagraj destroyed their home while they were being held there on the grounds that it was an illegitimate building.

The current push to demolish the homes of people who allegedly took part in the protests is being contested in a petition filed by Jamiat Ulama-i-Hind before the Supreme Court. The Uttar Pradesh administration was asked to respond to the case on June 16, but no interim respite was provided.

The local development authority, a separate entity from the State government, carried out the demolitions, the Uttar Pradesh administration justified last week.

In particular, the State argued that the construction of Javed Mohammad’s home was “in breach of Prayagraj Development Authority guidelines” and that proceedings were started far “before than the rioting” that broke out following the insult about the Prophet made by now-suspended BJP politician Nupur Sharma.