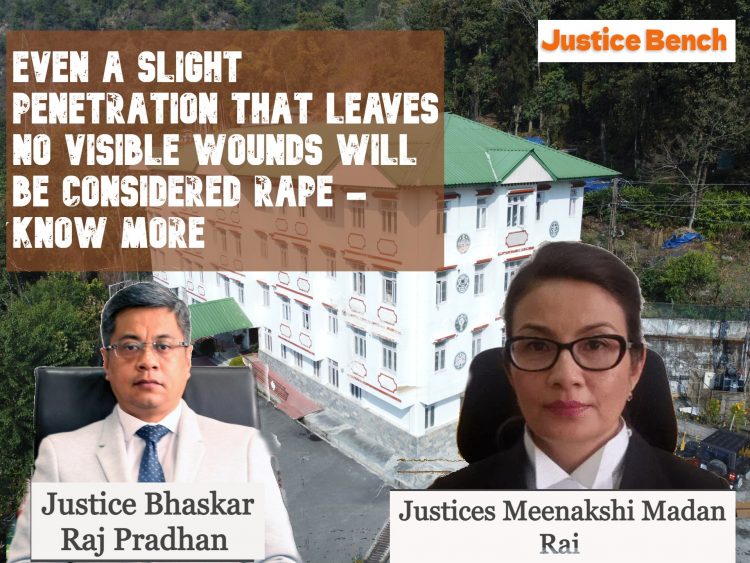 In the case of Subash Chandra Chettri v. State of Sikkim, the Sikkim High Court ruled last week that even in the absence of obvious actual injury, even a minor penetration of a male sexual organ inside the vagina will be considered rape and aggravating penetrative sexual assault.

“Penetration to any extent is sufficient to constitute rape under IPC and penetrative sexual assault under the POCSO Act,”

The observation was made by Justices Meenakshi Madan Rai and Bhaskar Raj Pradhan as they upheld the conviction of an accused for rape under the Indian Penal Code and penetrative sexual assault on a child under the age of twelve under the Protection of Children from Sexual Offenses (POCSO) Act by the trial court.

The trial court had found the appellant guilty of sexually abusing a 12-year-old. He received a 20-year prison term and a Rs.5,000 fine.

The victim had no externally apparent injuries, and a local examination found just redness around the labia minora, yet the accusation was of penetrative sexual assault, according to the appellant’s motion to the High Court in appeal.

The High Court looked at the trial court’s ruling, noting that the victim had repeatedly narrated the occurrence and that the judge had found her testimony to be robust and convincing. The redness, which was noted the same morning following the occurrence, according to the trial judge, supported the prosecution’s case.

“We find that the learned Special Judge has correctly appreciated the evidence and the law, and found the appellant guilty of the offences charged,“

The victim’s deposition was deemed to be explicit, consistent, and clear by the division bench. It discovered no reason to be sceptical as a result.

“In the circumstances, we uphold the conviction of the appellant under section 376 AB of the IPC and section 6 of the POCSO Act,