Five people were sentenced by a Karnataka court to a 5-crore fine and seven years in prison for stealing money from the Mandya Urban Development Authority. 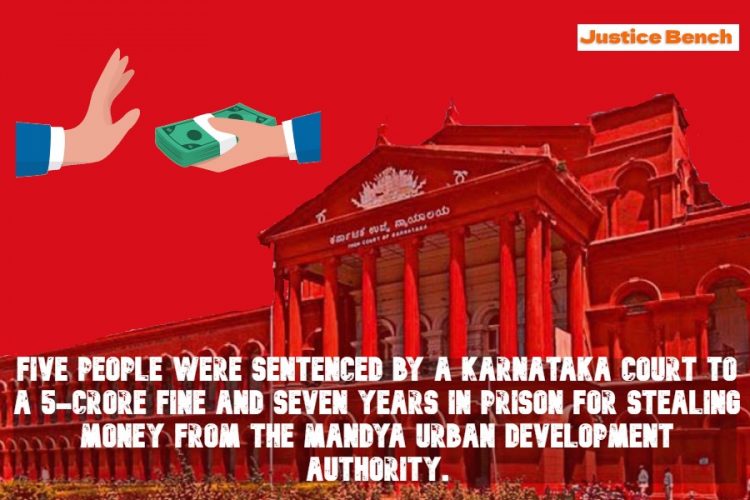 Five people were sentenced by a Karnataka court to a 5-crore fine and seven years in prison for stealing money from the Mandya Urban Development Authority.

Five people were recently condemned by a Karnataka court to seven years in prison and fined a total of five crores (one crore each of them) for misappropriating money from the Mandya Urban Development Authority (MUDA).

The judge stated that the act should be taken seriously in light of the harm made to the government exchequer while refusing to be lenient in sentencing the guilty.

In order to ensure that the loss to the government exchequer is made up for, it was highlighted that a fair fine must be imposed.
As a result, the MUDA received compensation totaling Rs5,02,00 from the total fine of Rs5,02,75,000

The accused were discovered to have planned a scheme to defraud MUDA of 5 crores, and the proceeds were initially deposited in one of their accounts before being transferred to the others. One of the accused was in charge of the accounts section at MUDA while working there as a First Division Assistant (FDA).

They were found guilty of crimes under both the Prevention of Corruption Act and the Indian Penal Code. But the accused pleaded for clemency in punishment, citing health issues.

The public prosecutor, on the other hand, pleaded with the Court to take the seriousness of the offences into account because economic crimes damage a nation’s economy.

It was therefore suggested that the punishment should be appropriate for the crime committed and serve as a deterrent to society.

The Court considered the fact that one of the accused was trusted with public property while performing a public function, but he betrayed the trust placed in him and damaged the reputation of the general public.

It was also mentioned that the action was carefully thought out and purposeful. The Court refused to show mercy since it was determined that loss was sustained by society as a whole as a result of the accused’s actions.

Additionally, it was noted that, given the nature of the offence, their poor condition could not be a mitigating factor.