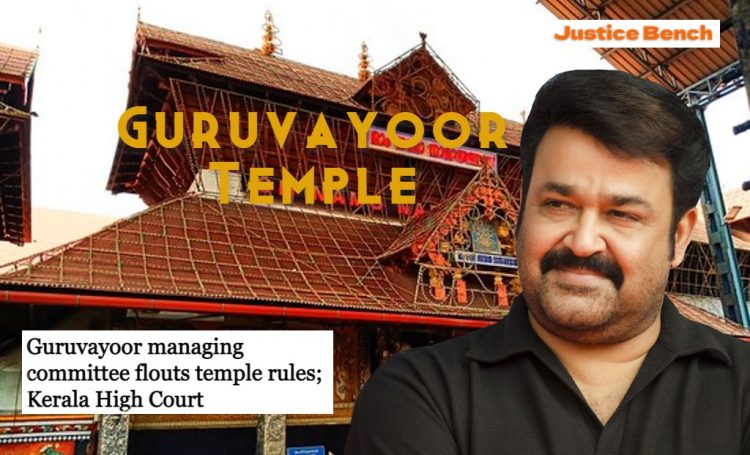 The Devaswom Managing Committee of Guruvayoor Temple was recently ordered by the Kerala High Court to cease allowing “a class of pople” to access the temple premises in their vehicles. In September 2021, renowned Malayalam film actor Mohanlal was given permission to drive his vehicle into the nadappanthal on the temple premises along with another vehicle belonging to a member of the managing committee, according to a division bench of Justices Anil K. Narendran and PG Ajithkumar.

The Court emphasised that all Lord Guruvayurappan worshippers are expected to exercise their right to worship in compliance with any limitations imposed by the managing committee of the temple, including those preventing the entry of people or vehicles.

According to the Court, permitting Mohanlal and people like him to enter in their automobiles goes against the rules that are expected of all worshipers.

The Court issued rulings in a case involving the entry of a former committee administrator and two active committee members into Guruvayur Sree Krishna Temple’s Nalambalam on Vishu, April 14, 2022, to view Vishukkani, which was argued to be in violation of a decision made by the managing committee on April 12 that placed an absolute restriction on entry to Nalambalam on Vishu morning. The case was brought before the Court suo motu based on an former administrator letter of committe.

The Court found that no security officers were suspended following the Mohanlal incident, in contrast to press claims that were published after controversy gathered steam on social media.

As a result, the Court ordered the managing committee to make sure that no managing committee member, administrator, previous devaswom officers, or worshipper violates any entry restrictions that are issued as they become effective.

The managing committee was also instructed by the court to think about how to make accommodations for senior citizens and anyone with physical and mental disabilities who want to attend the temple.