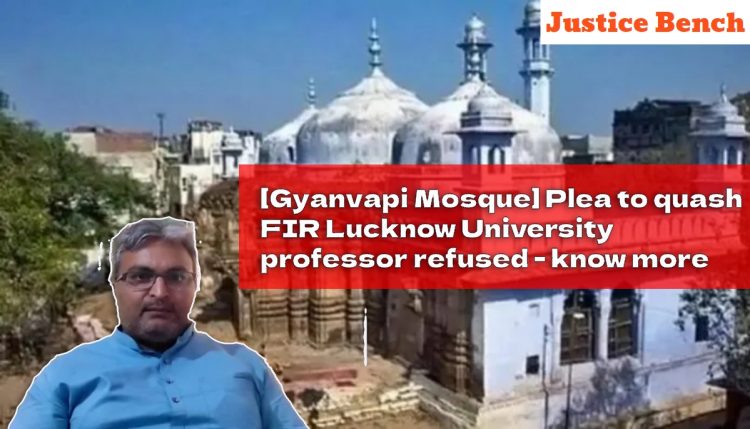 On Thursday, the Allahabad High Court comprising Bench of Justice Arvind Kumar Mishra and Manish Mathur in the case of Ravi Kant vs the State of UP refused to quash an FIR registered against a Lucknow University Professor Mr. Ravi Kant Chandan.

The Bench comprising Justice Arvind Kumar Mishra and Manish Mathur directed the police to comply with provisions of u.s 41(1)b r.w Section 41A CrPC if the professor is arrested.

An FIR was filed against the professor on May 9 after he made comments during a debate on the Satya Hindu YouTube channel.

The professor was booked under sections 153A, 504, and 505(2) of the Indian Penal code and under section 166 of Information Technology.

Sec 153A IPC – punishes persons who indulge in wanton vilification or attacks upon the religion, race, place of birth, residence, language etc of any particular group or class or upon the founders and prophets of a religion

Sec 504 IPC – provocation to any person, intending or knowing it to be likely that such provocation will cause him to break the public peace

During the debate, it is alleged that the professor made indecent statements about the temple and Hindu saints, causing hurt feelings among University students.

t was also alleged that when the university students confronted him he called goons from outside to beat up the students.

The professor filed a petition before the High Court, requesting that the FIR be quashed and that police do not arrest the accused in a mechanical manner.

As per the court, there is mere apprehension on part of the petitioner that he would be arrested and therefore the court directed the police if the accused is arrested then provisions u.s 41(1)(b r.w Section 41A of CrPC be followed.