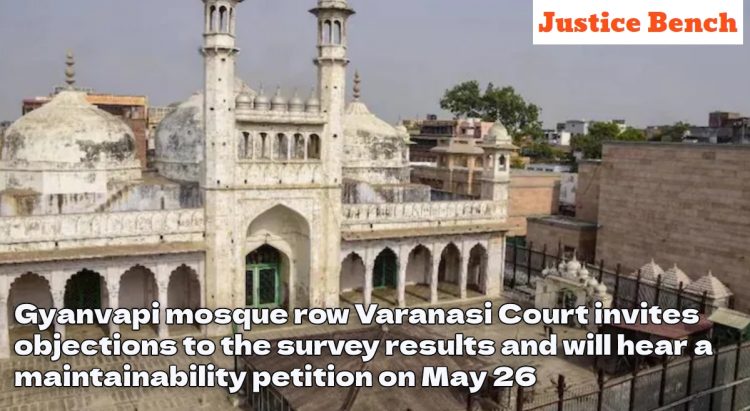 The Varanasi court will now consider the Muslim party’s plea under Order VII Rule 11 of the Code of Civil Procedure (CPC) challenging the suit’s maintainability, which was filed by Hindu parties on may 26.

On Tuesday, a Varanasi court hearing the dispute between the Gyanvapi Mosque and the Kashi Vishwanath Temple requested the parties to file their objections to the attorney commissioner’s assessment report.

The court will now hear the Muslim party’s plea under Order VII Rule 11 of the Code of Civil Procedure (CPC) challenging the suit’s maintainability, which was filed by Hindu Parties on May 26.

“The former presiding officer, Civil Judge, CD, Varanasi, while passing the order dated May 19, 2022, had invited objections from the parties on the commissioner’s report. The said order is currently in effect. Therefore, the parties can submit objections to the commission report within seven days,”

The Hindu parties had requested that the objections to the report of the attorney commissioner who had conducted a study of the Gyanvapi Mosque and videotaped it be considered before the maintainability plea was decided.

The lawsuit is a civil complaint brought by Hindu worshippers demanding the right to worship inside the Gyanvapi Mosque, which was once a Hindu temple and still housing Hindu deities.

The Muslim parties have filed an application under Order VII Rule 11 of the Code of Civil Procedure (CPC) challenging the suit’s maintainability, claiming that the Places of Worship Act of 1991, which was passed during the Ram Janmabhoomi movement, seeks to protect the status of all religious structures as they were on August 15, 1947.

Section 4 of the Act says that a place of worship’s religious nature must remain the same as it was on August 15, 1947. It prevents courts from hearing cases involving institutions of worship. The rule also specifies that such matters that are currently ongoing in courts will be dismissed.

A civil court had already ordered an attorney commissioner to survey the Gyanvapi Mosque. The survey was conducted by the advocate commissioner, who videotaped it and filed a report with the civil court.

The Supreme Court, however, transferred the civil case to the District Judge.

The Hindu parties then argued in front of the District Court that the suit’s maintainability could not be determined without considering the survey report because the character of the religious edifice was at issue.