High Court Delhi rules, that the amount spent by a brother for the maintenance of a divorced sister should be taken into account when calculating maintenance 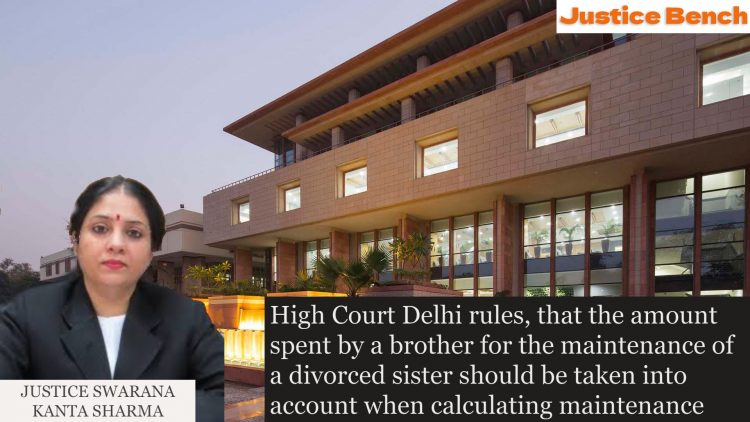 High Court Delhi rules, that the amount spent by a brother for the maintenance of a divorced sister should be taken into account when calculating maintenance

Recently, the Delhi high court bench comprising JUSTICE SWARANA KANTA SHARMA in the case of SARITA BAKSHI Vs STATE & ANR observed that a brother in India does not abandon his divorced sister, and the brother’s expenses on the sister should be considered when determining the amount of maintenance to be paid to the wife.

The High Court Delhi While hearing the appeal filed by the appellant against a Family Court order that the husband pays her Rs. 6000 per month.

On the other hand, the counsel for respondent no. 2 stated that the learned Trial Court could not have granted maintenance from the year 2011 because it was an application for enhancement of the maintenance that had already been granted, and the enhanced maintenance could only be granted from the date that the respondent’s salary was increased.

The Court noted that the Maintenance is neither alms nor a lottery. The criterion that the woman is unable to support herself and that the husband has ignored or failed to support her is the most crucial precondition for Section 125 to take effect.

It is to be noted that maintenance is neither alms nor lottery. The most important precondition for Section 125 to become operative is the condition that the wife is unable to maintain herself and that the husband has neglected or refused to maintain his wife.

The court also stated that the wife has not given any evidence as to whether or not the husband’s 79-year-old father is financially reliant on him.

The court disagreed with the wife’s assertion that a divorced sister is not reliant on her husband, stating that while the sister is entitled to maintenance from her husband, in Indian society, the brother also provides for the sister and does not forsake her.