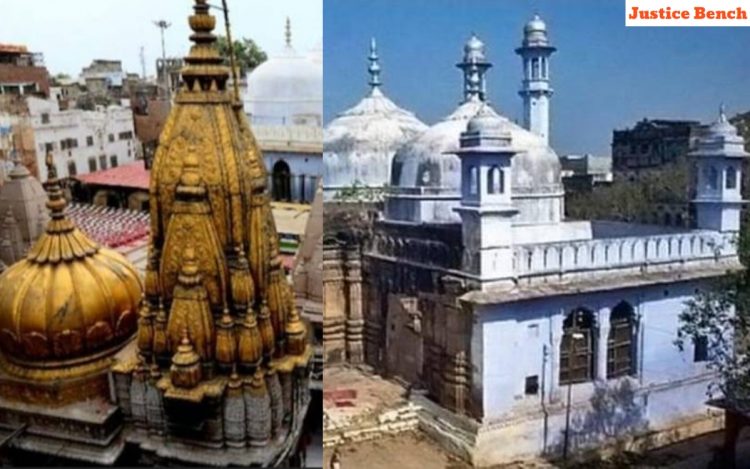 The Hindu Sena President has filed an intervention plea before the Supreme Court seeking the dismissal of an appeal filed by the Muslim party challenging the Allahabad High Court order which paved the way for the advocate commissioner’s survey of the Gyanvapi Mosque.

the main contention of the pleas is that the Gyanvapi mosque is exempt from the Places of Worship Act, 1991, because Kashi Vishwanath Temple and Shringar Ma Gauri temple within the Gyanvapi mosque complex falls under the Ancient Monuments and Archaeological Sites and Remains Act, 1958.

“It is quite clear from reading of Section 3 and Section 4(1) and (2) that Place of Worship Act does not apply to Gyanvapi mosque complex,”.

The appeals were filed by the Muslim party, Committee of Management of Anjuman Intezamia Masajid, challenging the videography and survey of the mosque are to be heard tomorrow before the supreme court.

The appeal has challenged an order of the Allahabad High Court permitting a court-appointed commissioner to inspect and conduct a survey and videography of the Gyanvapi mosque.

The survey was completed by the advocate commissioner who had submitted a report to the civil court in Varanasi stating that the exercise had led to the unearthing of a Shivling from the mosque premises even though an appeal was pending before the apex court. This Varanasi court passing orders on Monday to seal the area after completion of the Survey.

The intervention application before the apex court logs the history of the structure, stating that the “Vishwanath” temple was at the disputed site since the 11th century. Further, It was demolished and rebuilt many times before being eventually demolished by Mughal emperor Aurangzeb in 1669 AD.

the application said that “The remains of the temple can be seen in the foundations, columns and at the rear part of the mosque,” .

The case originated from a suit before the lower court by one Rakhi Singh and others seeking a declaration that their right to profess their religion as guaranteed under Article 25 of the Constitution is being breached.

The suite claimed that there are deities such as Maa Gauri, Lord Ganesh and Hanuman etc at the site and that Hindus should be allowed to enter the site and offer their prayers and perform pooja and offer bhog to their deities.

The civil judge after hearing the contentions had passed an order on August 18, 2021 appointing an advocate commissioner. The judge had also ordered the commissioner to visit the site and inspect and collect evidence as to whether the deities exist at the site. The commissioner was further given liberty to seek police force assistance in case of any disturbance or resistance to the collection of evidence by virtue of videography.

The same was challenged before Allahabad High Court which dismissed the appeal on April 21.

Subsequently, the Masajid Committee filed a plea before the lower court claiming that the court commissioner was biased and should be replaced.

The same was dismissed on Thursday last week paving way for the survey.

Later an appeal was filed before the apex court against the April 21 order which is slated to be heard tomorrow.