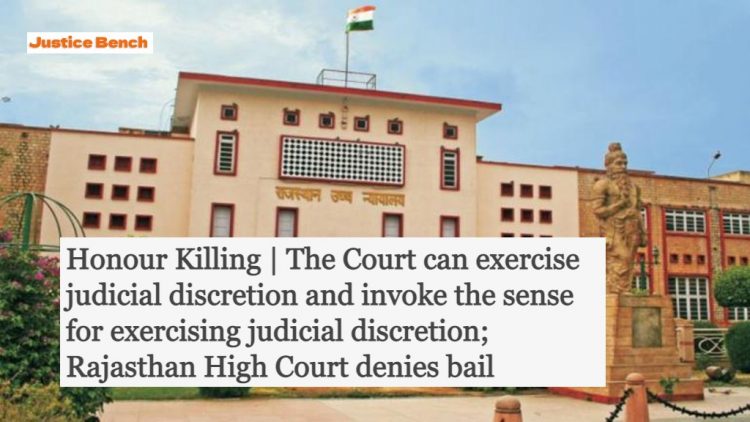 In the case of Bhim Saini v. State of Rajasthan, a Rajasthan High Court bench led by Justice Farjand Ali refused the petitioner’s bail application, stating that the investigating agency had left some facts unaddressed.

The FIR was filed at the request of the complainant, who is the deceased’s father. The complainant indicated that he lives in Bundi and that his kid has been living in Kota for the past year and a half. In “Barda of Jakhmund,” his son’s body was discovered. After an inquiry, the petitioners were seized and placed in judicial custody. Accused petitioners who are in judicial custody for offences punishable under Sections 302, 201, 120-B, and 364 of the Penal Code, 1860, filed the current bail application(s).

To oppose the current bail application, the State used an autopsy report, the dead’s last whereabouts in the presence of accused persons, death threats reported by the deceased on multiple occasions, CCTV footage, and call details.

The Court noted that the present case has its own unique characteristics, including a strong trait of honour killing and a circumstantially spreading stench of intent-full homicidal death on account of honour and status.

The Court further noted that the present case’s foundation is primarily based on circumstantial evidence, as no direct evidence or eyewitnesses are available. Furthermore, this Court is well aware that the current case of the accused petitioner(s) will only be adjudicated on the issue of bail. As a result, careful consideration and examination of the facts and circumstances are not usually required.

The Court is responsible for using judicial discretion as well as summoning the sense to exercise judicial discretion. The character of such pertinent facts and circumstances of the case is crucial in order to make a credible conclusion concerning an issue put before it. Because the character of relevant facts and circumstances tends to present two possible sides of an issue, judicial discretion recognises the side of an issue that is closer and more pregnant with sound legal features based on Rule of Law parameters. As a result, there is a narrow line between a final hearing on the merits and a hearing on a bail plea under section 439 of the Criminal Procedure Code.

The Court went on to say that while there is no one-size-fits-all formula for granting and denying bail, it is obvious from judicial comments on the subject that each case has its own set of facts and circumstances.

After reading the charge sheet, the Court concluded that the chain of events indicating a well-planned conspiracy and the cooperation of each accused individual is very much on record.

As a result, the Court determined that the current case is ineligible for the accused petitioners to be granted bail at this time. As a result, both of the accused’s bail applications are hereby dismissed.