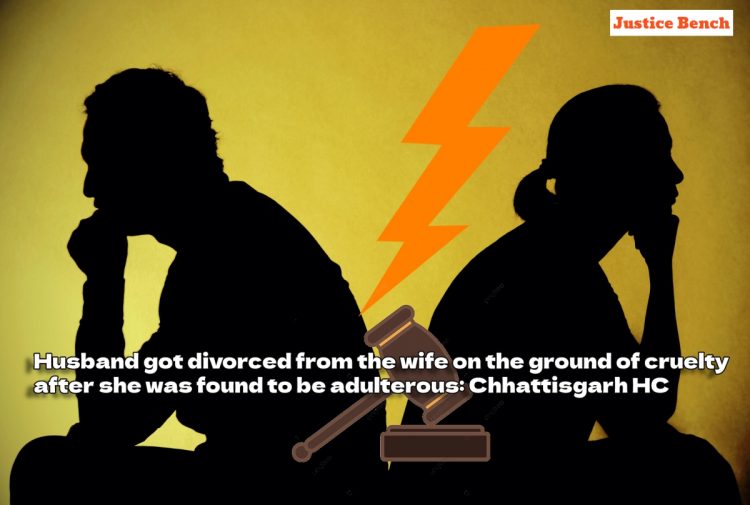 The Chhattisgarh High court in the case of Pritam Lal Sahu vs Kalpana Sahu granted divorce to the couple after noting that reconciling their differences and deciding to cohabit with each other after a long hiatus, the couple lived together hardly for 24 days, but the wife was found to be pregnant for over 40 days.

The Chhattisgarh High Court in the case of Pritam Lal Sahu vs Kalpana Sahu granted a decree of divorce on the ground of cruelty under Section 13 (1)(i) of the Hindu Marriage Act to a husband who alleged that his wife was leading an adulterous life.

The Bench comprises Justices Goutam Bhaduri and Sanjay Agrawal was hearing a man’s plea seeking a divorce from his wife on the ground of cruelty.

the court noted that after apparently reconciling their differences and deciding to co-habit with each other after a long hiatus, the couple lived together hardly for 24 days, but the wife was found to be pregnant for over 40 days.

“It is, thus, apparent that after the alleged marriage, she had participated in sexual intercourse with some one else other than her husband, else she could not have carried such a pregnancy. It is true the husband didn’t opt for a DNA test and didn’t raise the contention in the proceedings filed by his wife seeking maintenance. But, merely on this ground, the material fact cannot be overlooked and it cannot be held that she was not leading an adulterous life, as held by the Family Court,”

The lower family court in Bilaspur had dismissed the husband’s plea for divorce on the ground that he didn’t opt for a DNA test while alleging adultery against his wife.

The High Court pinpointed the fact that the couple got married in 1996 and after 12 years of their marriage the wife had filed a First Information Report (FIR) against her husband and in-laws claiming domestic violence and dowry demand.

“True, it is, that the husband and his family have been acquitted, but it appears that no allegations as such were ever made by the wife prior to lodging of the alleged FIR in 2008, based upon which the husband was put in jail for some time. Levelling allegations after such a long time would have thus caused a mental cruelty upon him,” .

The judges further noted that the marriage between the couple has irretrievably broken down, and therefore, it is dead for all purposes and cannot be revived. Therefore, the Court granted a decree of divorce to the husband under Section 13 (1)(i) of the Hindu Marriage Act.

The Bench further noted that prior to the couple’s 24 days living together, the husband was bed-ridden after suffering a leg fracture.

“Proof beyond reasonable doubt is not postulated where human relationship is involved and eye witnesses are difficult to obtain and thus direct evidence to prove adultery is not possible and has to be inferred from circumstances which exclude any presumption of innocence in favour of the person against whom it is alleged. In view thereof, it is evident that the wife had sexual intercourse with some one else other than her husband and he is, therefore, entitled to a decree for dissolution of marriage on the ground enumerated under Section 13 (1) (i) of the Hindu Marriage Act, 1955,”.