If a courier service driver is unaware of what is being transported, the provisions of Section 37 of the NDPS Act will not apply 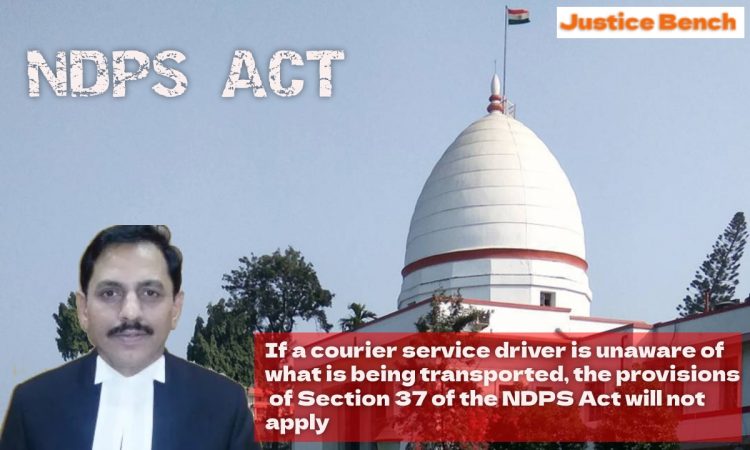 If a courier service driver is unaware of what is being transported, the provisions of Section 37 of the NDPS Act will not apply

The Gauhati High court Bench comprising Single-judge Justice Ajit Borthakur in the case of Lorik Ram vs State of Assam considered a police entry in the station diary that stated that the courier service’s vehicle may have been utilised by drug peddlers.

The Gauhati High Court recently granted bail to a courier driver, claiming that the provisions of Section 37 of the Narcotic Drugs and Psychotropic Substances Act (NDPS) do not apply to courier drivers who are unaware of what is contained in the vehicle they drive.

When a commercial quantity of contraband is involved, Section 37 prohibits a court from giving bail to an accused under the NDPS Act unless the court is convinced that there are reasonable grounds to believe the accused is not guilty and will not commit any crime while on bail.

The accused claimed that he had no idea what was carried in the truck and was only doing his job by dropping the vehicle off at the location specified in his assignment sheet.

Even the police diary stated that the narcotics suppliers would have mistreated the vehicle, according to the judge.

“It transpires (from diary entry) that the accused is the driver of truck of VRL Logistics and it is his duty to deliver the consignments of various goods loaded by the said company to the consignee as per challan. After thorough investigation, the investigating officer in his note, dated March 7, noted that ‘narcotic suppliers/peddlers’ misused the ‘vehicles of VRL Logistics to fulfil their malicious intent’, which were just carried by the accused driver,”

Justice Borthakur stated that the IO’s finding is subject to the investigation’s final outcome.

“Therefore, this Court is prima facie of the opinion that rigors of Section 37 of the NDPS Act are not attracted in the peculiar backdrop of facts and circumstances concerning the present accused.”

Ram was scheduled to drive the vehicle from the company’s unit in Gorchuk, Guwahati, to Agartala, according to the bail plea. On February 2, 2022, he drove a vehicle containing mouth washers that had been purchased by a medical agency in Varanasi, Uttar Pradesh.

On February 14, a team of police intercepted Ram’s vehicle at a special naka check point on National Highway (NH) 08, where 10 cartons containing 3,000 bottles of Phensedyl Cough Syrup were recovered from the truck.

According to the prosecution, the intercepted bottles were sent for forensic testing, and the reports indicated that the sample of Phensedyl Cough Syrup tested positive for Codeine (present as Codeine Phosphate) and included 186.5 ml per bottle.

As a result, the bail request was vigorously resisted, citing the commercial value of the seized samples.

The judge, however, recognised that the accused driver was unaware of the substance put in the truck and that he had been in custody for more than 104 days, and thus granted him bail on a INR 50,000 surety.