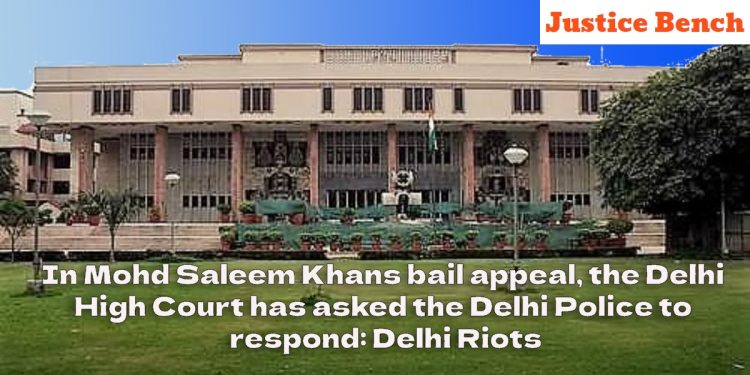 Mohd Saleem Khan has been in prison for his suspected role in the bigger conspiracy case involving the Delhi Riots.

On Monday, the Delhi High Court issued a notice to the Delhi Police regarding Mohammed Saleem Khan’s bail application, a garment exporter who has been mentioned in the bigger conspiracy case involving the Delhi Riots.

The Bench comprising Justices Mukta Gupta and Mini Pushkarna issued notices in the matter The case has been postponed for a hearing on July 20.

Khan’s lawyer, Mujeeb Ur Rehman, told the court today that Khan has been in prison for the past two years and that the only evidence against him is inconclusive CCTV footage.

Despite the fact that his client’s claimed role is modest in comparison to others, he stated that several other accused have already been granted bail in the case.

On March 13, 2020, the Delhi Police detained Khan after he was mentioned in three First Information Reports (FIRs). He faces charges of criminal conspiracy, culpable homicide, and other charges under the Indian Penal Code (IPC) and the Unlawful Activities Prevention Act (UAPA) (UAPA).

He is accused of being one of the key conspirators in the riots, having incited the crowd and destroyed CCTV recordings. While he has been granted bail in two FIRs, his bail request in the bigger conspiracy case involving the Delhi Riots was denied by the special court in March.