In the Gyanvapi case before the Supreme Court, a petitioner challenging the Places of Worship Act seeks impleadment 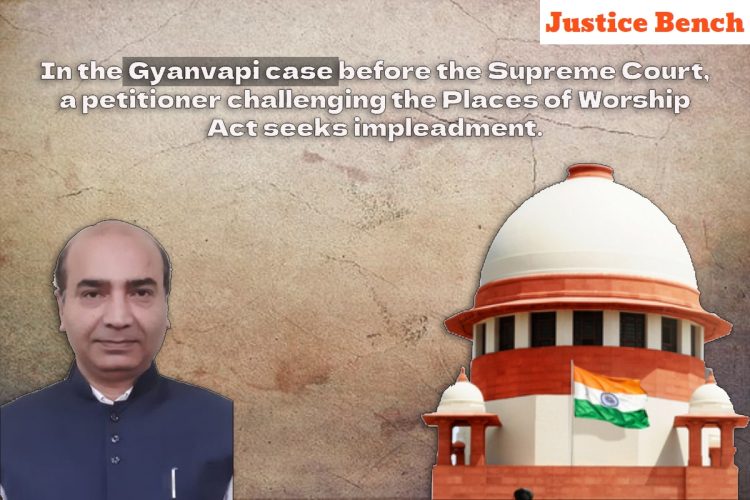 In the Gyanvapi case before the Supreme Court, a petitioner challenging the Places of Worship Act seeks impleadment.

In March 2021, the Supreme Court gave notice to the Central government in Ashwini Kumar Upadhyay’s petition challenging the Act’s legitimacy.

BJP politician and lawyer Ashwini Kumar Upadhyay has asked the Supreme Court to intervene in the Gyanvapi mosque controversy after filing a public interest litigation petition challenging the constitutional validity of the Places of Worship (Special Provisions) Act, 1991 (Act).

According to the motion, Upadhyay is seeking impleadment for a proper understanding of the facts and circumstances of the case.

The 1991 Act, which was passed during the height of the Ram Janmabhoomi movement, aims to maintain the status of all religious structures as they were on the date of independence by prohibiting courts from hearing cases that raise questions about their character.

The statute also states that such matters that are currently ongoing in the courts would be dismissed.

However, the Act made an exception for the Ram-Janambhoomi site, which served as the foundation for courts, including the High Court and the Supreme Court, hearing the case.

The Supreme Court invoked this law in 2019 when granting the disputed site at Ayodhya to child deity Ram Lalla, notwithstanding the fact that Ayodhya land had been exempted. However, in light of the Act, the Supreme Court has reaffirmed that comparable cases involving additional locations cannot be heard.

In March 2021, in response to Upadhyay’s petition challenging the Act’s constitutionality, the Supreme Court issued a notice to the Central government.

The 1991 Act, on the other hand, preserved August 1947 as the cut-off date for legalising the illegal crimes of barbaric invaders.

“It is submitted that Hindus Jains Buddhists Sikhs have right to profess, practice propagate religion as provided in their religious scriptures and Article 13 prohibits from making law which takes away their rights. Moreover, the status of mosque can be given only to such structures which have been constructed according to tenets of Islam and mosques constructed against the provisions contained in Islamic law cannot be termed as Mosque,”.

Muslims cannot claim any right to any piece of ground claiming to be a mosque unless it is built on lawfully owned and occupied virgin land, according to the plea.

“The mosque constructed at temple land cannot be a mosque, not only for the reason that such construction is against Islamic law, but also on grounds that the property once vested in the deity continues to be deity’s property and right of deity and devotees are never lost, howsoever long illegal encroachment continues on such property,”.