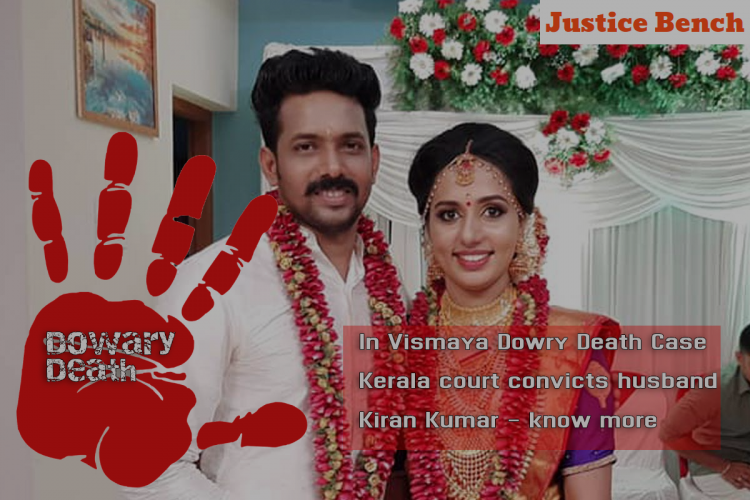 The Kerala High Court on Monday in Vismaya dowry case, who is a 24-year-old Ayurveda Medical student, on June 21, 2021, was found hanging from the window of a bathroom in Kumar’s house.

A Kerala court on Monday in the dowry death case of his wife Vismaya convicted Kiran Kumar.

The hearing on sentencing will take place tomorrow.

Vismaya dowry case, who is a 24-year-old Ayurveda Medical student, on June 21, 2021, was found hanging from the window of a bathroom in Kumar’s house.

Kumar husband of diseased was booked for charges under Sections 498A, 306 and 304B among others of the Indian Penal Code.

Sec 498 A IPC -subjecting a woman to cruelty for dowry

Vismaya had sent images of bruises and cuts on her body to her relatives via WhatsApp just days before her death, saying that she was being harassed by her husband for dowry. Her family published screenshots of her WhatsApp chats and voice notes after she was found dead.

Due to the physical abuse meted out to her by Kumar and his family She had allegedly suffered the injuries in the backdrop of dissatisfaction over the “gifts” given to them for their wedding.

Early reports alleged suicide, it was later investigated as a potential homicide.

Kumar was denied bail by the Sasthamcotta Judicial First Class Magistrate and later by the Kerala High Court.

The death of the 24-year-old Ayurveda Medical student in Kerala caused outrage and reignited debate about the incidence of dowry-related harassment, abuse, and death in Kerala.

All political leaders, including Chief Minister Pinarayi Vijayan, have vehemently criticised the incident, with Vijayan issuing a statement calling for measures to end the dowry system in society.

The government also ordered all Heads of Departments of Public Sector Undertakings (PSUs), autonomous bodies, cultural and other government institutions to obtain a declaration from all male government servants within one month of their wedding that they had not taken any dowry in connection with their marriage in a circular issued on July 16, 2021.