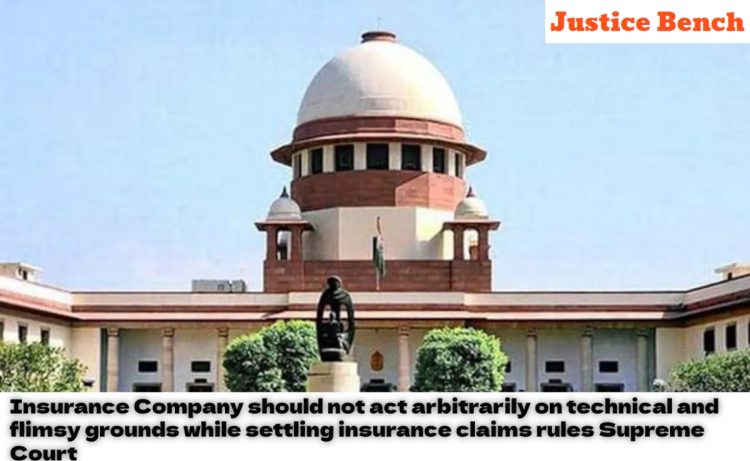 The Supreme Court recently in the case of Gurmel Singh v. Branch Manager, National Insurance Company Limited observed that while settling insurance claims, the insurance company should not be overly technical in their requests for papers that the insured is unable to supply owing to circumstances beyond his control.

A division bench of Justices MR Shah and BV Nagarathna was hearing an appeal challenging the National Consumer Disputes Redress Commission’s (NCDRC) decision to deny the appellant relief under the insurance policy.

For the period of August 22, 2012 to August 21, 2013, the appellant’s truck was insured with the respondent-insurance firm. In addition, the appellant had paid the company a premium of INR 28,880.

The appellant’s insured automobile was stolen on March 23-24, 2013. The appellant immediately filed a First Information Report (FIR), and he also alerted his insurance company and the Regional Transport Office (RTO) about the loss of his vehicle.

The appellant also provided all of the documentation requested by the insurance company, but the claim was not settled.

Aggrived, the appellant filed a complaint with the District Consumer Disputes Redress Commission (DCDRC), which dismissed the case and ordered the appellant to present a duplicate certified copy of the truck’s registration certificate to the insurance company within a month.

Within a month of receiving the claim, the insurance company was ordered to settle it according to the terms and circumstances of the policy.

However, the RTO refused to release a duplicate certified copy of the certificate of registration to the appellant, claiming that the details about the registration certificate on the computer had been locked due to a complaint of the truck being stolen.

Following that, the appellant filed an application with the insurance company, accompanied by a photocopy of the certificate of registration and registration particulars, as required by the RTO. Despite this, the appellant’s claim was not resolved.

Furious, the appellant filed a complaint with the DCDRC, which dismissed it, stating that because the appellant had not supplied the requisite paperwork for claim settlement, the non-settlement of the claim could not be considered a failure in service. The DCDRC’s order was likewise affirmed by the State Commission and the NCDRC.

The appellant then filed this appeal with the Supreme Court.

In this backdrop,The insurance company had grown overly technical in resolving the claim, according to the Court, and had acted arbitrarily.

The appellant has been asked to furnish the documents which were beyond the control of the appellant to procure and furnish. Once, there was a valid insurance on payment of huge sum by way of premium and the Truck was stolen, the insurance company ought not to have become too technical and ought not to have refused to settle the claim on non-­submission of the duplicate certified copy of certificate of registration, which the appellant could not produce due to the circumstances beyond his control,”

As a result, the Bench annulled the orders of the DCDRC Chhattisgarh, the State Commission, and the NCDRC, ruling that the appellant is entitled to the insurance sum of Rs. 12 lakh, plus 7% interest from the date of filing the claim.