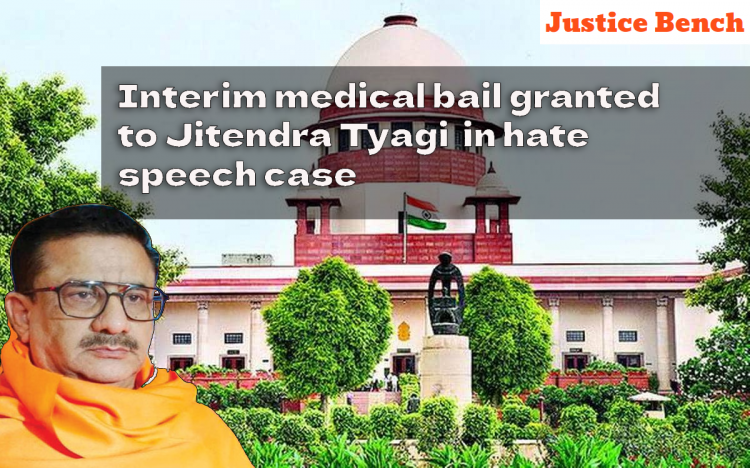 The Bench comprises Justices Ajay Rastogi and Vikram Nath, however, conditionally it was emphasized that Tyagi should not give any hate speeches which could disturb harmony in the society.

Further, then granted the bail on medical grounds after stressing that harmony must be maintained in society.

Tyagi was arrested by Uttarakhand Police in January 2022, he was the former chairperson of the Shia Waqf Board who recently converted to Hinduism, he is accused of his inflammatory speech at Haridwar in December last year.

Earlier Tyagi approached the Supreme Court after the Uttarakhand High Court rejected his bail plea in March this year.

Tyagi has been party to a spate of litigation in the recent past.

In the case of insulting Islam and the Prophet, the Srinagar court had recently taken cognisance of a complaint against him.

The Supreme Court January had issued notice to the Central and Uttarakhand governments on public interest litigation (PIL) seeking a probe into the Haridwar Dharam Sansad.

The Supreme Court in April last year dismissed a public interest litigation (PIL) petition filed by Rizvi that sought deletion of certain verses from the Holy Quran alleging that they violate the law of the land and promote extremism. Besides the Court while rejecting the plea had imposed costs of ₹50,000 on Tyagi.

The Allahabad High Court had sought his response in a plea seeking that he be refrained from making statements on social media about Islam.