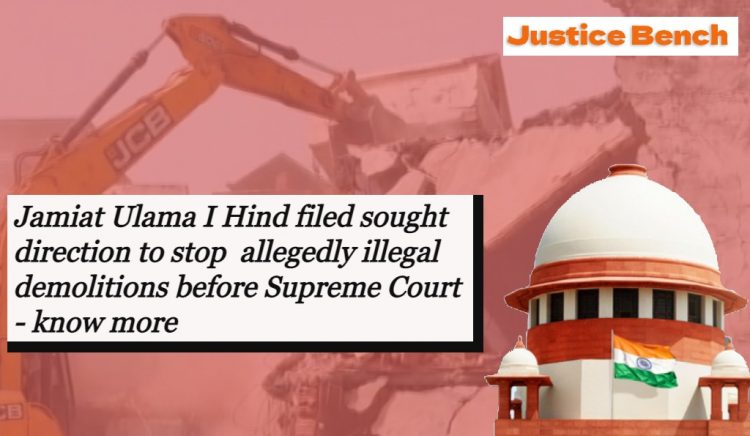 Jamiat Ulama I Hind has petition in the Supreme Court in the case of Jamiat Ulama I Hind vs Union of India, requesting action against Uttar Pradesh (UP) government officials accused of demolishing dwellings throughout the state in violation of municipal regulations.

Demolitions were carried out in UP after protests were held against suspended BJP leader Nupur Sharma, who had made remarks about Prophet Muhammad, who is revered by the Muslim community, according to the application, which was filed in an already pending case before the top court on such demolitions.

The application prayed for directions to the state of Uttar Pradesh to ensure that no further demolition exercises of any kind are carried out in the state “without following due process, and that any demolition must be done only after adequate notice and opportunity for hearing is given to each of the affected persons.”

It was further stated that Section 27 of the Uttar Pradesh Urban Planning and Development Act, 1973, demands that the impacted person be heard before the demolition is carried out and that the affected person be given at least 15 days’ notice.

It was also pointed out that under the 1973 Act, anyone who is aggrieved by a demolition order has 30 days to file an appeal with the chairman under the Act.

“It is pertinent to note that amidst the demolition the Chief Minister of the State of Uttar Pradesh directed officials in the state to continue with the demolition drives that are being carried out in several districts,”