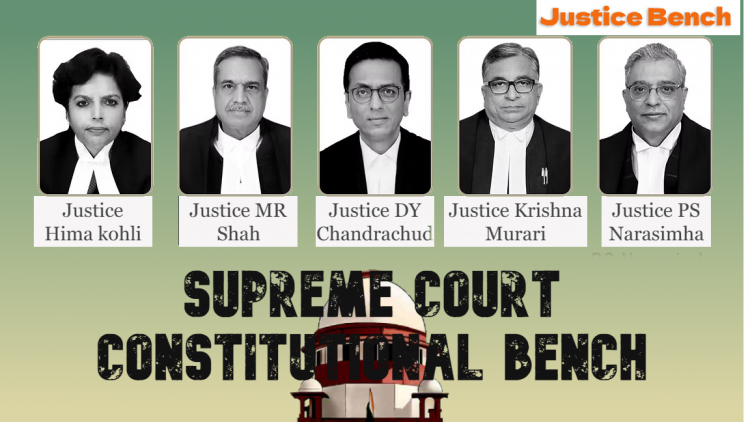 Four significant cases will be heard by a Constitution bench led by Justice DY Chandrachud on Wednesday: the dispute between the Shiv Sena factions led by Uddhav Thackeray and Eknath Shinde; the Citizenship Act of 1955 case; the disagreement between the Delhi government and the Union government over which government has administrative control over the transfers and postings of officers in Delhi; and the legality of reservations for Anglo-Indians, Scheduled Castes, and Scheduled Tribes

Justices MR Shah, Krishna Murari, Hima Kohli, and PS Narasimha are the other judges on the bench, in addition to Justice Chandrachud.

The Bench to hear on

The application of Section 3(1)(a) of the Citizenship Act of 1955 is at issue in this case. The crucial question of whether citizenship is obtained by birth or by descent will be addressed by the court with regard to those born in India after January 26, 1950 and before July 1, 1987.

The National Register of Citizens (NRC) list will be significantly impacted by the case’s conclusion.

The bench will hear arguments from the Shiv Sena’s two rival groups, Eknath Shinde and Uddhav Thackeray, over a number of petitions pertaining to the political unrest in Maharashtra.

The complaints concern the establishment of the BJP government in Maharashtra under the leadership of Eknath Shinde, the exclusion of dissident MLAs, and the ownership of the Shiv Sena’s bow-and-arrow symbol.

The Supreme Court had defined the scope of the speaker’s authority to reject members of the Legislative Assembly in the Nabam Rebia ruling for 2016. When addressing the political crisis in Maharashtra, the Supreme Court noted that the Nabam Rebia Bench had left one issue unresolved: Can a speaker exercise his authority to oust a member when a no-confidence petition against the speaker is still being considered by the House?

The five-judge panel will decide which administration in Delhi—the Central government or the Delhi government—has administrative control over officer transfers and postings.

A panel headed by Justice Chandrachud is anticipated to make a ruling about the breadth and reach of the legislative and executive powers of the Centre and the Government of the NCT of Delhi with regard to managing the bureaucracy in the nation’s capital. The Delhi Government had contested Rule 13 of the Transaction of Business Rules, 1993 and the modified Government of NCT of Delhi Act, 2021, both of which purported to give the Lieutenant Governor extra authority.

An interpretation of Article 239AA of the Constitution, which contains unique provisions relating to the National Capital Territory, was made by a Constitution Bench of the Supreme Court in 2018. Discussions in the case focused on the NCT’s distinctive status, the Delhi Legislative Assembly’s authority, the LG’s role, and how those factors interacted.

In that decision, the Court had stated that the LG must cooperate with the NCT government and cannot act unilaterally without the support and counsel of the Council of Ministers.

The appeals pertaining to specific elements, such as services, were subsequently brought before a normal Bench for decision-making based on the ruling of the Constitution Bench.

On April 14, 2019, the regular bench delivered its ruling on a number of particular issues pertaining to the dispute between the Delhi government and the LG.

Justices AK Sikri and Ashok Bhushan, the two judges on the bench, had disagreed on the topic of “services” under Schedule VII, List II, Entry 41 of the Indian Constitution.

Whether the exclusion of “services” related to Entry 41 of List II of the Seventh Schedule from the legislative and executive domain of the NCT of Delhi, pursuant to a notification of the Government of India dated May 21, 2015, is unconstitutional and illegal was the question the Court was asked to address.

That issue was sent to a larger Bench because the judges on the Bench varied, and it was discussed by a three-judge bench. After that, at the Centre’s request, the three-judge bench referred the case to the Constitution Bench.

The Constitution Bench’s majority judgement did not take into account the purpose and intent of the expression “insofar as any such matter is applicable to Union Territories” as it appears in Article 239AA(3) of the Constitution, which is the central and important aspect of the said provision, which was the main justification for the request to refer the case to a five-judge bench.

The Constitution (79th Amendment) Act, 1999, which expanded the reservations of seats in the Lok Sabha and Legislative Assemblies of the States for Anglo Indians, Scheduled Castes, and Scheduled Tribes communities, is challenged in a fourth case filed before the Constitution court.