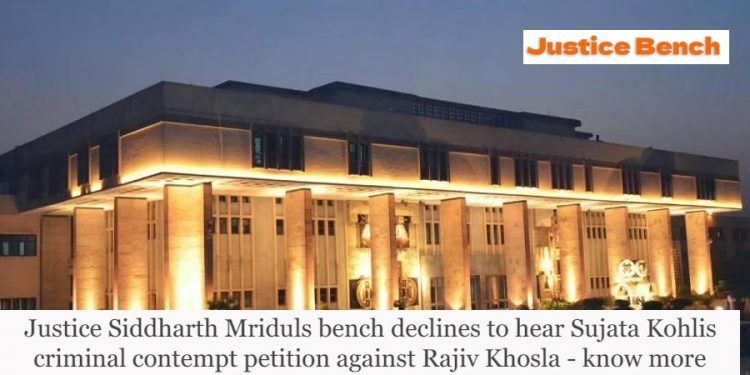 After Kohli objected to the case being listed for another day without providing notice, the Bench withdrew from hearing the matter.

Two district judges were also present on the dais during Khosla’s sentence along with Chief Metropolitan Magistrate (CMM), who was hearing the case, and the judges were watching a video of the alleged occurrence. They acknowledged the unclear audio, but stated that they will revisit the matter later because there were other issues on board that needed to be resolved.

At request of Ms Kohli, who appears in person, in order to obviate any possible allegation of bias, we consider it appropriate to recuse from hearing the proceeding. List before another bench.”

Justice Mridul stated in the order,

Khosla was found guilty by a Delhi court on November 6 of attacking Kohli in 1994. She was a practising advocate at the Tis Hazari Court at the time. More than 27 years after Kohli first complained against Khosla, CMM Gajender Singh Nagar judged Khosla guilty of offences under Sections 323 (voluntarily causing harm) and 506 (criminal intimidation) of the Indian Penal Code.

When the Chief Metropolitan Magistrate (CMM) was about to issue orders on sentencing against Khosla, according to Kohli’s contempt plea, he and his supporters from the Bar held the court hostage, yelled epithets, and continuously interrupted the judge. It was argued that as a result, the judge was unable to issue an order in front of the entire court.

The petition also claims that two district judges were present in court on the day of sentencing, and that the CMM Court was filled with advocates shouting protest signs.

Kohli charged Khosla with forcing her to take part in different protests and demonstrations back in August 1994. She was requested to attend a seminar on family courts on July 29, 1994, but she rejected because of her schedule. She was then threatened by Khosla, who declared that she would lose access to all of her amenities. Her table and chair in the courthouse were taken away shortly after she filed a civil lawsuit in an effort to obtain an injunction.

In order to change the form of the lawsuit from a permanent injunction to a required injunction, she had filed an application. The civil judge said that she will also visit the location on the same day, despite the Court’s request for the parties to maintain the status quo.

Khosla entered with another co-accused named PS Rathi and a mob of 40–50 individuals while Kohli was waiting on her seat for the judge. The mob grabbed Kohli by the hair, twisted her arms, and dragged her while hurling threats and abuse.