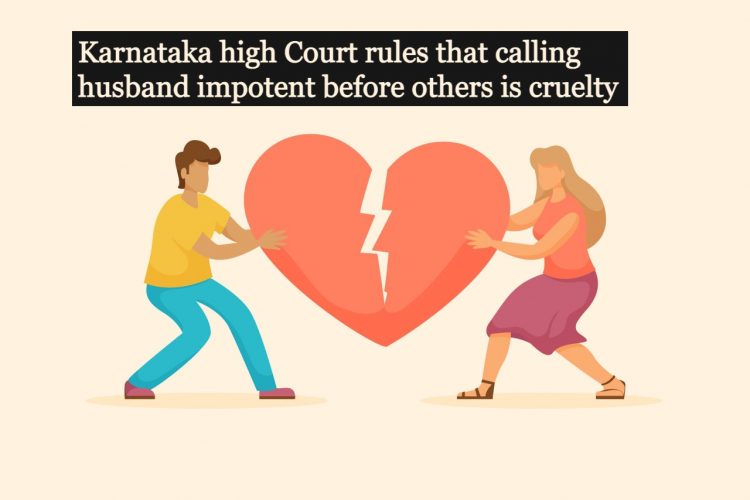 In the matter of Shashidhar Chachadi versus Vijayalaxmi Chachadi, the Karnataka High Court bench of Justices Sunil Dutt Yadav and KS Hemalekha recently held that calling a husband impotent in front of relatives without substantiating the claim amounted to mental cruelty.

The Court held that no sensible lady, would ever make such accusations against her spouse in front of others while passing a decree of divorce in favor of man.

The woman made public declarations of her husband’s alleged impotence despite her inability to verify it, according to the Court.

“Having not proved the allegation, the unproved/unsubstantiated false allegations about impotency has led to mental disturbance of the husband causing disharmony between the husband and wife, which makes the husband unable to stay with the wife,”

The bench was hearing an appeal filed by a man who was contesting the dismissal of his divorce petition by a Dharwad Family Court.

According to the appellant, his wife acted normally for a month after they married in May 2015, but then her behavior changed drastically. He stated that she would label him incapable to fulfil his marital responsibilities and impotent in front of their family.

The woman, on the other hand, said that her husband would frequently avoid her, causing her to believe that he was impotent. She claimed that she wanted to live with her husband but that he would find some excuse to avoid her.

The woman was unable to produce any evidence to substantiate her charges against the husband of impotency and inability to fulfil conjugal commitments, according to the Court.

The wife’s acts would be considered cruelty under Section 13(1) (ia) of the Hindu Marriage Act, according to the Court.

In light of this, the Judge ruled that the trial court erred in ruling that the husband’s claim of cruelty was unproven.

As a result, it overturned the Family Court’s judgement and decree and granted the husband’s petition under Section 13(1)(ia) of the Hindu Marriage Act, which resulted in a divorce decision in his favour.

The Court ordered the husband to pay INR 8,000 per month in maintenance to the wife until she remarries, despite the fact that he earned INR 38,000 per month.