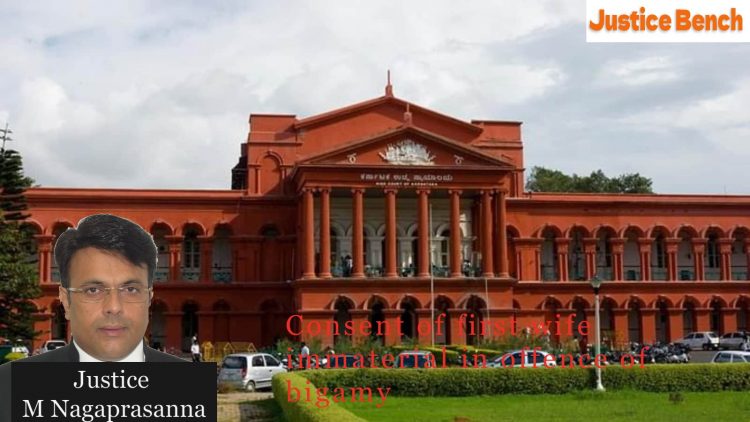 The Karnataka High Court Bench comprising Justice M Nagaprasanna  in the case of Anand v Chandramma The first wife’s consent would be irrelevant in determining whether or not bigamy was committed.

Hearing a motion to dismiss a complaint filed under Section 494 (Bigamy) of the Indian Penal Code on the grounds that the subsequent weddings were done with the first wife’s agreement and that the complaint was filed too late.

The Court was hearing a case against a 76-year-old man who had been married three times. The case was filed against him, his third wife, family members, and friends by his first wife.

The husband told the court that they were all living nicely together and that the weddings were done with the permission of the other women. However, the first wife was dissatisfied with the husband’s gifting of some things to the third wife and filed a lawsuit.

The husband protested against the private complaint being filed 25 years after the third marriage, despite the fact that he did not dispute his marriages.

As a result, the main question before the High Court was whether bigamy constituted a continuing offence or if it had been eradicated due to the passage of time.

To answer this, the Supreme Court concluded in State of Bihar v Deokaran Nenshi that an ongoing offence was distinguished from an offence committed once and for all.

“In the teeth of the admitted facts of the petitioner marrying thrice and its subsistence even as on day, the plea of delay in registration of the crime would pale into insignificance, as bigamy in the case at hand is a continuing offence,”

As a result, the single-judge ruled that the husband was guilty of bigamy since he acknowledged to being married to three women at the same time.

The case against the husband’s relatives and friends, on the other hand, was dismissed because the Court believed that they could not be brought into these proceedings until there was evidence that they were responsible for the weddings.

“It is for the protagonists in the quadrangle to resolve the issue amongst themselves and not drag other persons into these proceedings. If the proceedings against other petitioners are not quashed, it would become an abuse of the process of law, result in miscarriage of justice and quadruplet harassment,”