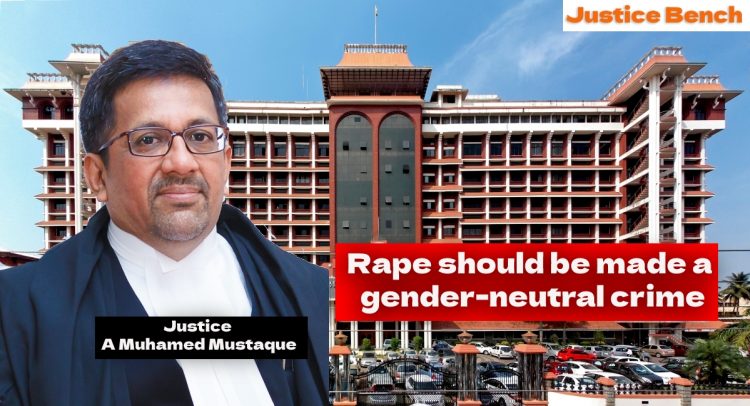 While hearing a contentious custody dispute between a divorced couple, Justice A Muhamed Mustaque made an important point about the lack of gender neutrality in Indian rape laws.

‘If a woman tricks a man under false promise of marriage, she can’t be prosecuted. But a man can be prosecuted for the same offence. It should be gender neutral,”

When the father’s advocate brought up a previous rape accusation against him, he claimed that he was out on bond and that the case was based on unsubstantiated allegations of intercourse under false promise to marry.

This caused Justice Mustaque to make a general comment about Section 376 of the Indian Penal Code, which specifies the penalty for rape.

“Section 376 is not a gender-neutral provision. If a woman tricks a man under false promise of marriage, she can’t be prosecuted. But a man can be prosecuted for the same offence. What kind of law is this? It should be gender neutral,”

This remark reflects the judge’s views in a recent case, in which the court decided that sex on the promise of marriage is only rape if it breaches the woman’s decisional autonomy.

While doing so, the Court noted that because the IPC lacks a gender-neutral provision for rape, the court will have to consider the accused’s and the woman’s respective positions in terms of dominant subordinate roles.

“It is to be remembered that the statutory provisions of the offence of rape as understood in the Indian Penal Code, is not gender neutral. A woman, on a false promise of marrying and having sexual relationship with a man, with the consent of the latter obtained on such false promise, cannot be punished for rape. However, a man on a false promise of marrying a woman and having sexual relationship with the woman would lead to the prosecution’s case of rape. The law, therefore, creates a fictitious assumption that the man is always in a position to dominate the will of the woman. The understanding of consent therefore, has to be related to the dominant and subordinate relationship in a sexual act,“

Justice Mustaque has also advocated for changes to marriage and divorce laws to make them more uniform for residents of all faiths and groups. This opinion was echoed in a historic decision enabling marital rape to be used as a basis for divorce.

From time to time, petitions contesting gender exclusion in rape laws have been filed in India’s constitutional courts.

In a public interest litigation (PIL) challenging the constitutional validity of Sections 375 and 376 of the IPC and requesting the creation of gender neutral rape provisions, the Delhi High Court issued notice to the Central government in 2017.

The Central government defended the gender-specific rape statute before the High Court in 2019, claiming that the decision was made since the majority of sexual harassment victims in the country are women.

The Criminal Justice Society of India filed a petition in the Supreme Court in 2018 challenging the constitutional validity of Section 375 of the IPC, claiming that it is not gender-neutral and violates Articles 14, 15 and 21 of the Constitution by not accounting for rape of men and transgender people.

The Supreme Court, on the other hand, refused to intervene.

“This issue is valid but the provision which is otherwise valid cannot be struck down,”

While allowing the petitioners to make a representation to the legislature, the Court remarked